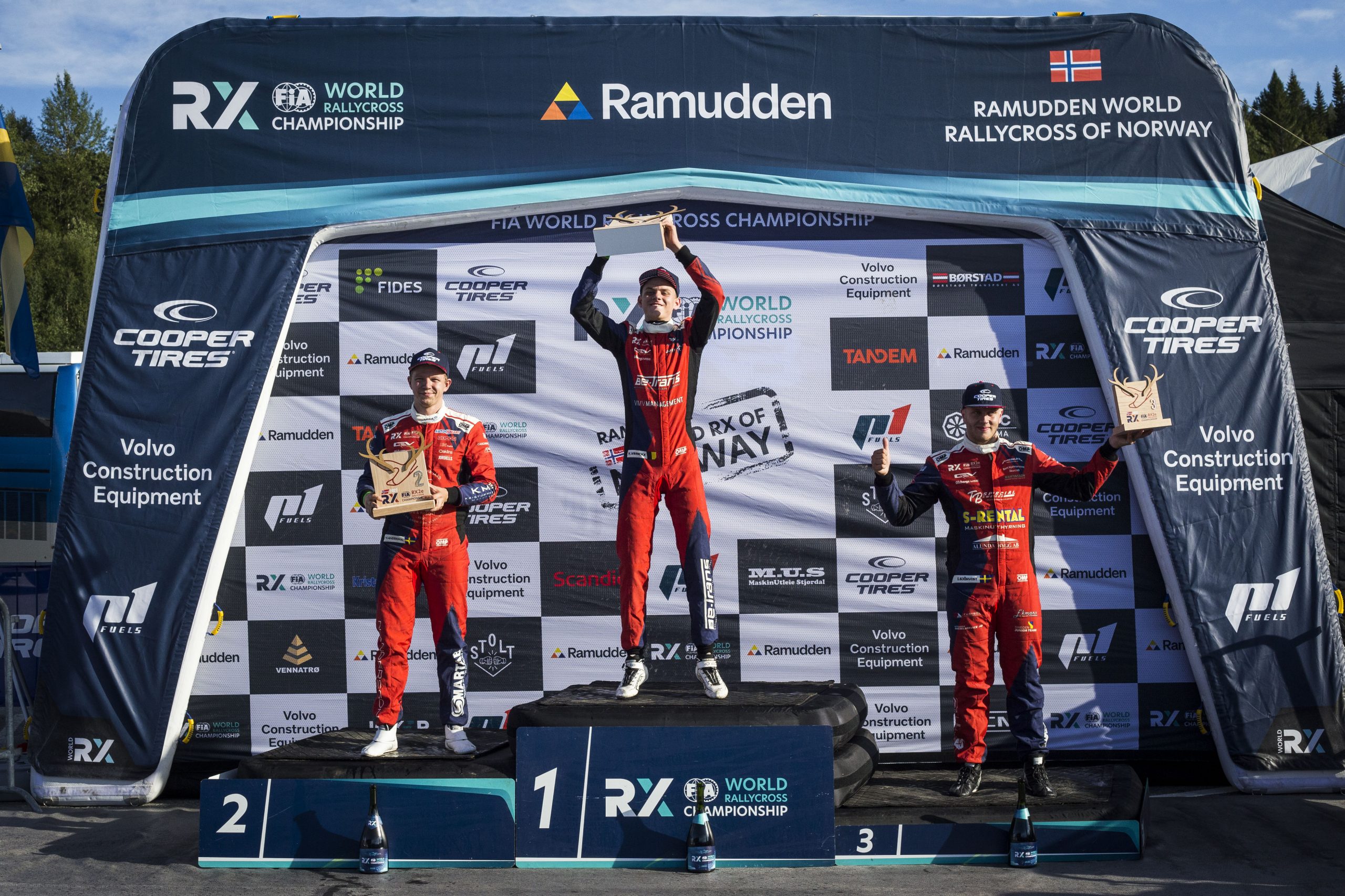 Raül Ferré and Pablo Suárez showed great pace throughout the weekend, entering the final with a superb performance

The FIA RX2e Championship held its second round of the season at the stunning Norwegian circuit of Lånkebanen. The track of Hell was the ideal setting for the spectacular battles that took place. Viktor Vranckx emerged victorious in the Grand Final for the many fans present in the stands.

Under an uncertain sky, which presaged possible light rain and a relatively low outside temperature, the competition got underway with the ten RX2e drivers tackling the steep slopes of the track that is the home of World Rallycross Norway, once the preliminary draw had been made to decide the starting positions for the first qualifying heat, Heat 1.

First of all, the drivers had the opportunity to do two free practice sessions in order to fine tune the cars and get to know a new circuit for them. Once both sessions were finished, the first big battle started, with Raül Ferré and Patrick O’Donovan in Pole Position for each of the two races.

The battle was intense in both, with Ferré fending off Viktor Vranckx’s attacks in the first metres. The Belgian managed to pass the Andorran in a manoeuvre that Nils Andersson took advantage of to move into second. Vranckx took the win and the fastest overall time, while Mark Flaherty was forced to retire. In the second race, Isak Sjökvist and Pablo Suárez overtook O’Donovan at the start to take the lead. The Swede crossed the finish line first, followed by the Spaniard.

The results made the grid for Heat 2, with Suárez and Sjökvist in pole position for their respective heats. The Gran Canaria driver held his rivals in the first corner to get away in the lead, taking advantage of a touch between Andersson, Laia Sanz and O’Donovan that made them lose time. With the right strategy, Pablo Suárez won the first race, followed by Andersson. In the second race, Viktor Vranckx passed Isak Sjökvist to secure the victory and the maximum points of this second qualifying. Meanwhile, Lance Woolridge and Aksel Lund Svindal completed their FIA RX2e Rallycross Championship debut with solid performances.

Sunday gave way to another day of racing passion. After the morning Warm Up, it was time for a vibrant Heat 3 in which the fight was absolutely intense. Isak Sjökvist took advantage of a faster pace than Nils Andersson to win his heat and set the fastest time. The second heat was marked by a touch at the start between Patrick O’Donovan and Raül Ferré, who came into contact with Viktor Vranckx and boxed in Pablo Suárez. With the cars really hurt, Vranckx managed to hold on to the lead, with Suárez chasing him and entering the finish line almost parallel.

The ranking after the three Heats determined the starting positions for the Progression Race. In both, strategies were decisive for the outcome, with Viktor Vranckx winning the first one, while Isak Sjökvist took the second one. Grids for the two Norwegian World Rallycross Semi-Finals in the FIA RX2e Rallycross Championship were thus set.

In the first, Viktor Vranckx, Pablo Suarez and Patrick O’Donovan escaped from a first corner where Lance Woolridge and Aksel Lund Svindal were left behind. Although Woolridge was able to continue in the race, Svindal was forced to retire, with his car unable to continue. Vranckx defended superbly against Suarez’s attacks, crossing the finish line as the winner in yet another duel at the limit between the Belgian and the Spaniard.

In the second, Isak Sjökvist held off a competitive Nils Andersson, who in turn held on to second place under relentless pressure from Raül Ferré. Laia Sanz looked for the gaps to overtake the Andorran rider, but the Catalan was unable to pass him and was out of the final, as was Mark Flaherty. Sjökvist took the win, followed by Andersson and Ferré.

The grid for the FIA RX2e Championship Final of the World Rallycross of Norway was set with Viktor Vranckx, Isak Sjökvist, Nils Andersson, Pablo Suárez and Raül Ferré, who fought hard as soon as the lights turned green. Suárez was blocked by the drivers in front, which Ferré took advantage of to overtake him, while Vranckx held off Sjökvist and Andersson. With the cards on the table, strategy played a key role once again, with the Belgian taking full benefit.

Viktor Vranckx took victory in the Norwegian World Rallycross, his second in the FIA RX2e Rallycross Championship. Nils Andersson managed to pass Isak Sjökvist and both completed the podium full of youth at the Lånkebanen track to close a great weekend of racing and spectacle. The next round of the championship will take place on the weekend of 3-4 September in Riga, Latvia. The challenging Bikernieki track awaits the electrifying RX2e warriors.