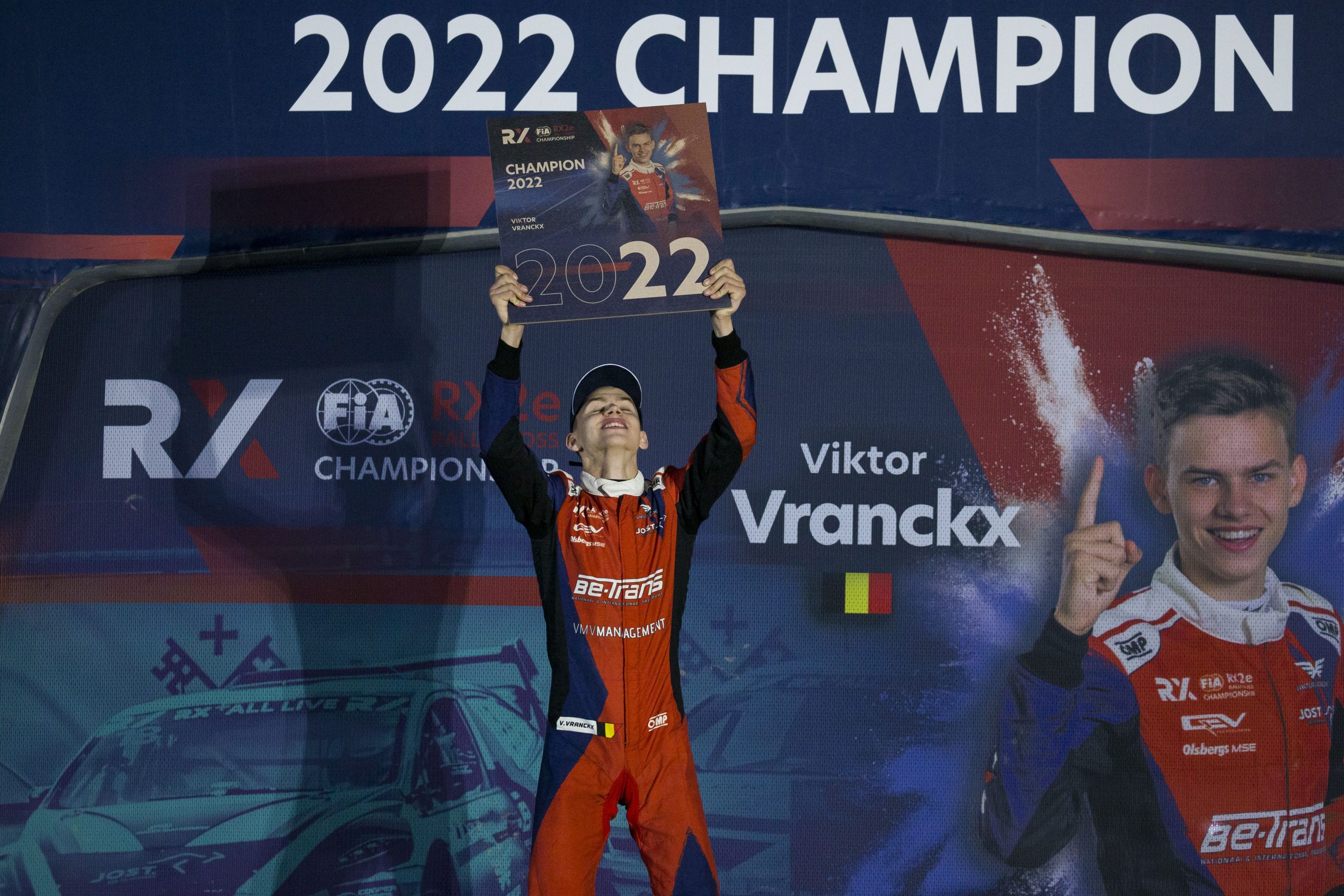 Viktor Vranckx might have been a newcomer to the World RX scene in 2022, but he wasted no time at all in making his mark, as a dominant start to the FIA RX2e Championship campaign paved the way to title success in his rookie season.

Viktor Vranckx might have been a newcomer to the World RX scene in 2022, but he wasted no time at all in making his mark, as a dominant start to the FIA RX2e Championship campaign paved the way to title success in his rookie season.

Mentored by inaugural RX2e champion and countryman Guillaume De Ridder, Vranckx was the pace-setter from the outset in the all-electric feeder series, as commanding triumphs in the opening two outings in Sweden and Norway put him on pole position for championship glory.

Round three in Rīga proved to be a more challenging affair, but showcasing his ability to pull it together when it counts, Vranckx dug deep to haul himself onto the rostrum with a third-place finish. On home soil at Spa, the Belgian’s bid for victory was then foiled by a brace of early errors in the heats and a determined Patrick O’Donovan in the final, with the Briton pipping his close friend to the chequered flag by the narrow margin of 0.150s.

Heading to Catalunya for the season finale, Vranckx essentially only needed a penalty-free weekend to seal the deal, but taking it easy is not his style, and after again having to fight back, the teenage prodigy hounded Isak Sjökvist to the end to maintain his unbroken podium run and deservedly clinch the coveted crown.

Sjökvist’s Barcelona breakthrough came after five previous rostrum results in RX2e and having looked to be down-and-out following the semi-final in Spain. The Swede has been a front-runner in the championship since day one, and he was a regular thorn in Vranckx’s side in 2022, finishing third in front of his home fans at Höljes and again in Hell before setting the pace for the majority of the weekend in Latvia, only to then be outmanoeuvred by O’Donovan in the all-important final.

First corner contact dashed his chances at Spa, before Sjökvist at last prevailed in the season finale to pip compatriot Nils Andersson and O’Donovan to second in the overall standings.

Andersson was Vranckx’s closest competitor in the early part of the campaign as he grabbed the runner-up spoils in each of the opening two rounds before signing off with a third-place finish in Barcelona, but failing to reach the final in either Latvia or Belgium cost the KMS protégé dear.

O’Donovan’s season was similarly one of peaks-and-troughs. The highs – boldly out-muscling Sjökvist to win in Rīga and then backing that up with an inspired drive to deny Vranckx at Spa – were sublime, but were countered by the disappointment of missing out on the final elsewhere, with a joker lap miscommunication hampering the Briton at Höljes and a penalty for contact curtailing his challenge in Catalunya.

Series sophomore Pablo Suárez was the only other driver to reach the rostrum over the course of the campaign, while Andorra’s Raül Ferré was the model of consistency as he advanced to the final on every occasion. Roberts Vitols shone on his debut at home in Rīga, and there were cameo appearances from Olympic skiing legend Aksel Lund Svindal, multiple Formula 1 podium-finisher Nick Heidfeld and two-time MotoGP race-winner Carlos Checa.

The final championship table can be found here.