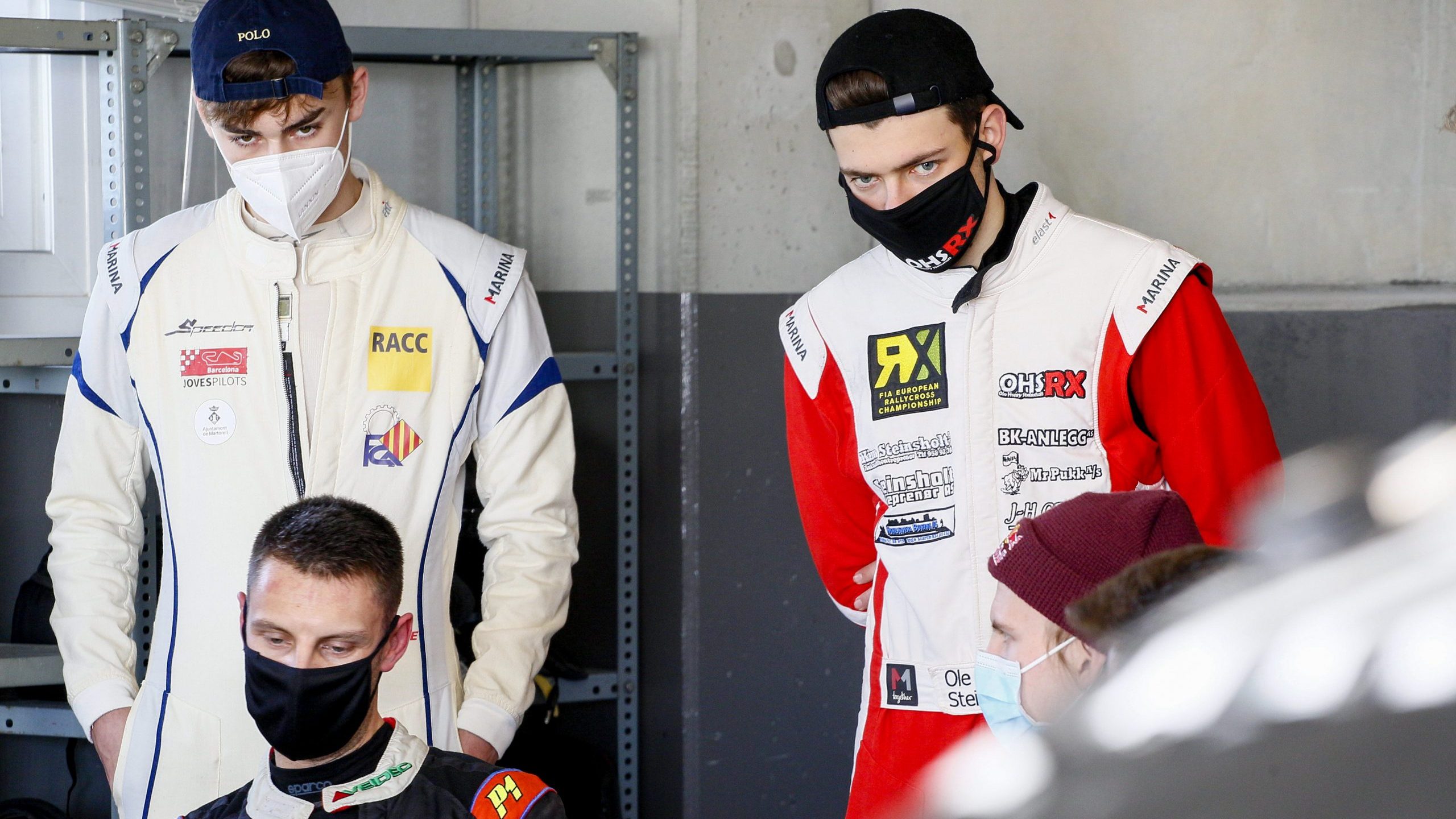 Rallycross’ next generation get to grips with FIA RX2e car

Seven drivers got a glimpse of the future when they tried out the new FIA RX2e Championship car around Spain’s Circuit Calafat earlier this month, with the test drawing unanimous praise ahead of the first-ever FIA electric rallycross championship’s inaugural season.

FIA RX2e will join the undercard to the high-profile FIA World Rallycross Championship at six European events in 2021, beginning at Spa-Francorchamps in Belgium on 22/23 May.

In anticipation of what is expected to be a full 20-car grid for the championship’s maiden campaign, testing has been proceeding at a rapid rate, with official test-driver Oliver Eriksson and namesake and countryman Sebastian Eriksson both putting the car through its paces in recent months.

The battery is mounted next to the driver in the centre of the car to ensure optimum, 50/50 weight distribution, while power is supplied evenly to the front and rear wheels by a pair of motors and inverters, all of which benefit from a cooling system to prevent excessive temperatures.

From inside the cockpit, competitors can manually adjust the amount of torque produced by the front and rear motors, the total torque deployed by all four wheels during the launch and the degree of regenerative braking on the front and rear axles.

“This was my first time in an electric car, and I have to admit, I was very pleasantly surprised. Although there was some initial adaptation required, right from the opening laps, the RX2e car instilled me with a lot of confidence thanks to its excellent balance. Placing the battery in the middle gives it a lower centre of gravity and greatly improves stability through corners and under braking, enabling the driver to brake later. It also means you don’t really notice the extra weight.

“To be honest, it drives very much like a combustion-engined car, but with several key advantages. The instant torque and power are hugely impressive, and not having to shift gears allows you to focus 100 per cent on your driving and all the details around that so you can improve your precision and efficiency.

“Although there is obviously less noise, it certainly isn’t silent and the flipside is that you experience an added feeling of speed from inside the car, plus you can now hear additional feedback such as the wheels spinning or sliding, which helps you to react faster when you’re on the limit. Overall, I was really impressed by the performance of the RX2e car, and I’m already looking forward to getting behind the wheel again.”

“I’ve competed in a lot of different classes, but this represented my first experience of driving an electric race car, and it was a very positive one. The handling and stability of the RX2e car is very good, and it’s faster than the existing Supercar Lites model – it was incredible to feel the power and very engaging to drive.

“Overall, the test was really encouraging, and I am working hard to make it onto the starting grid for what is sure to be a very exciting first season in RX2e. Whether you like it or not, electric is definitely the future of motorsport. If and when the manufacturers return to rallycross, I believe this is the only way.”

“Although I’ve driven electric cars on the road, this was my first time in an electric race car and I have to say, the RX2e car is really enjoyable to drive. The on-board technology is incredible. There are a lot of parameters involved and I was very surprised by the acceleration – it actually felt like being back in a combustion-engined Supercar.

“QEV and OMSE have done an outstanding job in developing this car, and I was able to make tweaks and changes every time I went out. Over the course of just one day behind the wheel, I felt like I took a tremendous step forward.

“As a championship, RX2e definitely has a lot of potential. Yes, we lose the engine noise which is a shame, but if rallycross is to attract the manufacturers back again and secure its future, electric is the only way to go.”

“The test was an amazing experience. The RX2e car’s behaviour was great – better than I had anticipated, for sure. At the beginning, the feeling was a little bit strange because there isn’t a gearbox as I am accustomed to, but I soon got used to that and thanks to the incredible support of the technical crew, it was an awesome day!

“With the equality between all the cars, I think that the FIA RX2e Championship is a very attractive proposition, so I hope to get another chance to drive in it – perhaps in a real race next time…”

“The test was a bit of a ‘first’ for me – my first time driving an electric car and first time with four wheel-drive – and it was an amazing day. It definitely created a strong impression. The RX2e car is very easy to drive, well-balanced and predictable, and there are lots of little set-up aspects you can adjust. I was surprised by how much power was available, too – the instant reaction when it launches was particularly impressive. I’d never experienced acceleration like that before.

“I’m very thankful to QEV Technologies and FIA RX2e for giving me the opportunity to test this car. It’s clearly going to be a very interesting, competitive and close championship, and for me, there’s no question that electric cars are the future for motorsport and that rallycross is the best discipline for them. The short, sharp races mean their performance can be exploited to the maximum.”

“I really enjoyed the experience of driving the RX2e car. It was a huge privilege to share a test track with Oliver Eriksson and receive help and advice from him and other great drivers.

“The car is awesome – it’s easy to drive close to the limit, it reacts quickly to driver input and it has a really well-balanced chassis. Instant torque is what every driver wants in a car, and you just have to modulate the throttle to manage the power. Also, without having gears to shift, you can focus on being smooth and finding the best line.

“I’m working hard to get the budget together to enter the championship. I really believe in this project and that environmentally-friendly and sustainable rallycross races are not only possible, but will also be a lot of fun.”

“My first experience of both rallycross and RX2e was fantastic. The car was very easy to learn, super agile and great fun to drive, and I was really impressed by its overall sensations – as well, obviously, as its power and speed. At the same time, everything felt very stable and well-controlled, and it has excellent traction on both gravel and asphalt. There is also a pretty big jump at Calafat that the suspension handled perfectly.

“There is a common misconception that because electric cars are generally heavier than internal combustion cars, they must be slower, but the reality is totally the opposite, as the RX2e car goes to show. That wasn’t a surprise to me, as I have several years’ experience of driving electric cars. There’s no question that electric is the future for motorsport, and this championship is certain to attract a very high calibre of competitors. I would love the chance to be amongst them.”

Following the opening round at Spa-Francorchamps in Belgium, the 2021 FIA RX2e Championship will visit Hell in Norway (12/13 June), Höljes in Sweden (3/4 July), Barcelona-Catalunya in Spain (24/25 July) and the Nürburgring in Germany (31 July / 1 August) before concluding at Lohéac in France (4/5 September).