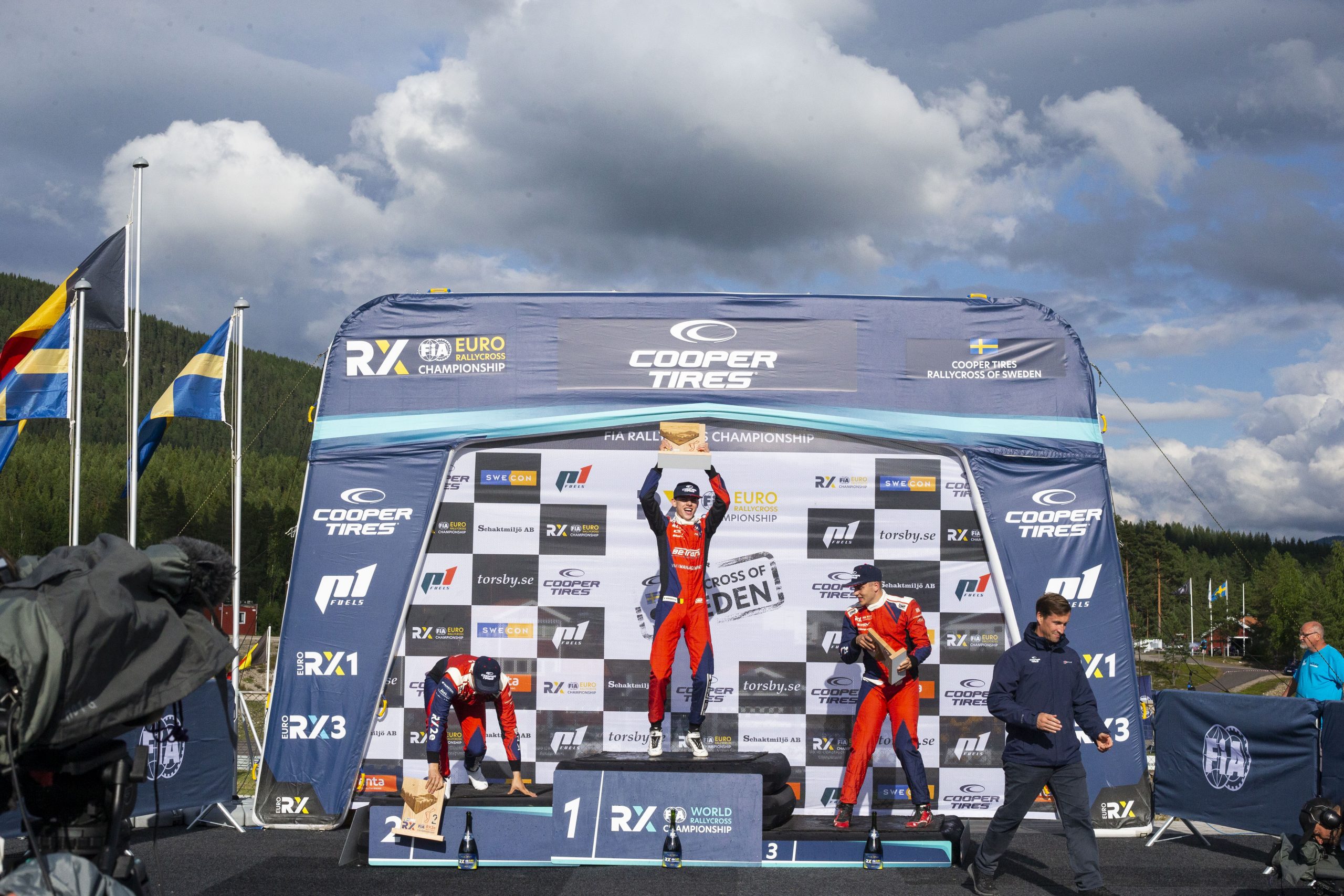 Prodigy kid Viktor Vranckx got his first taste of glory after winning the RX2e Final at the Cooper Tires Rallycross of Sweden 2022. His speed and consistency saw him progress steadily to the Final, where he won ahead of Swedish drivers Nils Andersson and Isak Sjökvist, who were racing on home soil and were joined by a fervent home crowd at the Cathedral of Rallycross.

On a tight grid with only hundredths of a second difference in the times set, Viktor was skilfully navigating the changing weather conditions as well as the hungry Swedish offence.

Nils Andersson took second place, after a weekend full of incidents and actions that had been detrimental to him. Even so, Nils showed a steady pace and even his mastery of driving with a flat tyre.

Isak Sjökvist completes the podium in 3rd position, vindicating his talent and overcoming the different adversities that the Rallycross Cathedral has offered us during the weekend.

More than 22,400 people attended the opening event of the 2022 season. A “Magic Weekend” that put the entire RX2e squad, the junior category of the FIA WRX, to the test. The unpredictable weather conditions put the finishing touch to the Sweden RX, and the fans’ expectations were met in no uncertain terms.

Saturday started with rain, leaving the track waterlogged prior to the drivers’ first contact with the spectacular Höljes circuit. The Free Practice session in the morning didn’t produce any significant lap times, but some drivers stood out, giving us a small hint of what was to come.

Exceedingly quickly, the sun set over the circuit, drying the asphalt intensely – but the soil more slowly. The Heat sessions took place in which the first qualifying race saw Viktor Vranckx take overall victory. Patrick O’Donovan got into the top at the second heat, slowed by light rain that soaked the mixed surface at Höljes.

Nils Andersson managed to place his car in second position in the ranking (89 p.), although he had intense friction with Pablo Suárez, who fought him until the last moments. His Swedish compatriot Isak, who had to put all his effort to overcome the tight challenge of the fight for the best times, closed the triplet in the Ranking standings with 84 points. Two points below was the brit Patrick O’Donovan, who slightly showed his intentions for Sunday’s encounter.

Tied with him in points, another surprise of the weekend: the Andorran hillclimb star Raül Ferré who had not yet said his last word on track. He showed an impressive pace along the weekend, getting used to the tricky track conditions, making a superb bow into rallycross.

Spanish driver Pablo Suárez was more consistent with his times, securing valuable points with the Sunday to go. At the end of the day, almost barely seconds separated the 6 top drivers on the Standings, with the H3 to go.

The important day welcomed everyone with an uncertain weather, threatening the track conditions and muddling the drivers forcing them to take last minute decisions. RX2e mechanics put their best efforts to set up the cars properly. The perfect cocktail every fan could have asked for: Rallycross Cathedral with incredibly mixed-up weather conditions and with the fight for the win so tight that put every fan’s heart on hold until the awaited Final.

Heat 3 was incredibly chaotic-but-fun, living up to the expectations of the stands and offering a unique spectacle of bumps, touches, contacts, crashes, run-offs and even stunts 360º. The fratricidal battle between Patrick O’Donovan, Isak Sjökvist and Pablo Suárez in the first race gave way to a bumpy start in the second, with Nils Andersson and Raül Ferré paying the price for an incident at the first corner with Mark Flaherty and Viktor Vranckx.

Catie Munnings showed and awe-inspiring improvement in her bow into RX2e all-electric single-spec series by drawing on her experience at her back. The Redbull athlete managed to figure out the car and the circuit progressively and in a consistent way.

Then the awaited Progression Race Session took place, which would determine the starting positions at the Semi-Finals. In it, a penalty for touching Filip Thorén deprived Pablo Suárez of a better final place, being relegated to fourth place. Both Vranckx and O’Donovan continued with their own way getting victories in search of the lead in the two elimination races.

In the first of them, Viktor Vranckx was once again the superior driver, unstoppable. Holded Nils Andersson firmly in his grasp, and both went through to the Final. Semi Final 2 was accidental again for Laia Sanz, who went out of track at the start. Patrick O’Donovan went fully rocketing his machine, but at the same time he crossed triumphant the finish line, the world crashed down on him.  An almost impeccable weekend, until The Capri Sun man forgot to take the joker lap, being penalized, and was ruled out of the Final. Thus, the victory went to Isak Sjökvist, with Raül Ferré obtaining the second for the decisive race. Catie Munnings was being comfortable as the sessions progressed, but a miscommunication with his spotter excluded her off the fight for higher positions in the standings. Pablo Suárez (SF2) set a better time than Filip Thorén (SF1), thus earning him a place in an unprecedented Final.

Time for it. Lights on red. It’s time. Ready to race. Lights out. Green. Go. In the Final, Vranckx held off the peloton that attacked from behind. Andersson and Suárez went wide at turn 2, choosing to take the Joker Lap at the first opportunity – but in the case of the Canary Islander it didn’t go as expected, blinded by the dust from Andersson, touching the inside guardrail which caused him to spin. Ahead, Ferré pressed Sjökvist, but the Swede defended himself from the Andorran rookie, who made a great debut in rallycross.

Finally, the flying kid Viktor took the victory at the Cooper Tires Rallycross of Sweden in the RX2e Rallycross Championship, making a clinic bow into the series – with Nils Andersson second and Isak Sjökvist third. Raül’s triumph by being at the final -and with no rallycross record, just hints what can could be a promising season for the Andorran ace. Pablo Suárez completed a great weekend in which he went from strength to strength, finishing fifth; local driver Filip Thorén got up to the 6th position by progressing throughout the sessions, while Laia Sanz signed a good performance in Höljes, finishing seventh. Her Extreme E rival Catie Munnings got lots of experience during the weekend and ended up 8th in the overall standings. Patrick O’Donovan, the biggest casualty of the day, dropped down to an unwanted 9th position. Veteran Mark Flaherty, although offered an unpredictable show in his stints, could not find the pace along the weekend.

Viktor Vranckx said: “Winning the opening round at the legendary circuit of Höljes is a dream come true! We’ve overcame the challenging weather along the weekend by a brilliant job carried out by my team!”

Nils Andersson said: “It was indeed a really weekend for me. I have something to keep up the motivation for Round 2 at Nürburgring.  To be at Magic Week’s podium is really very special and for sure I will remember it for the rest of my life!”

Isak Sjökvist said: “This weekend has been tough. Viktor and Nils were so fast. I tried to keep up with them, but I missed some technical spots from the car – small details needed to face the rivals and get the margin. I think I have potential to fight for the Championship Title!”