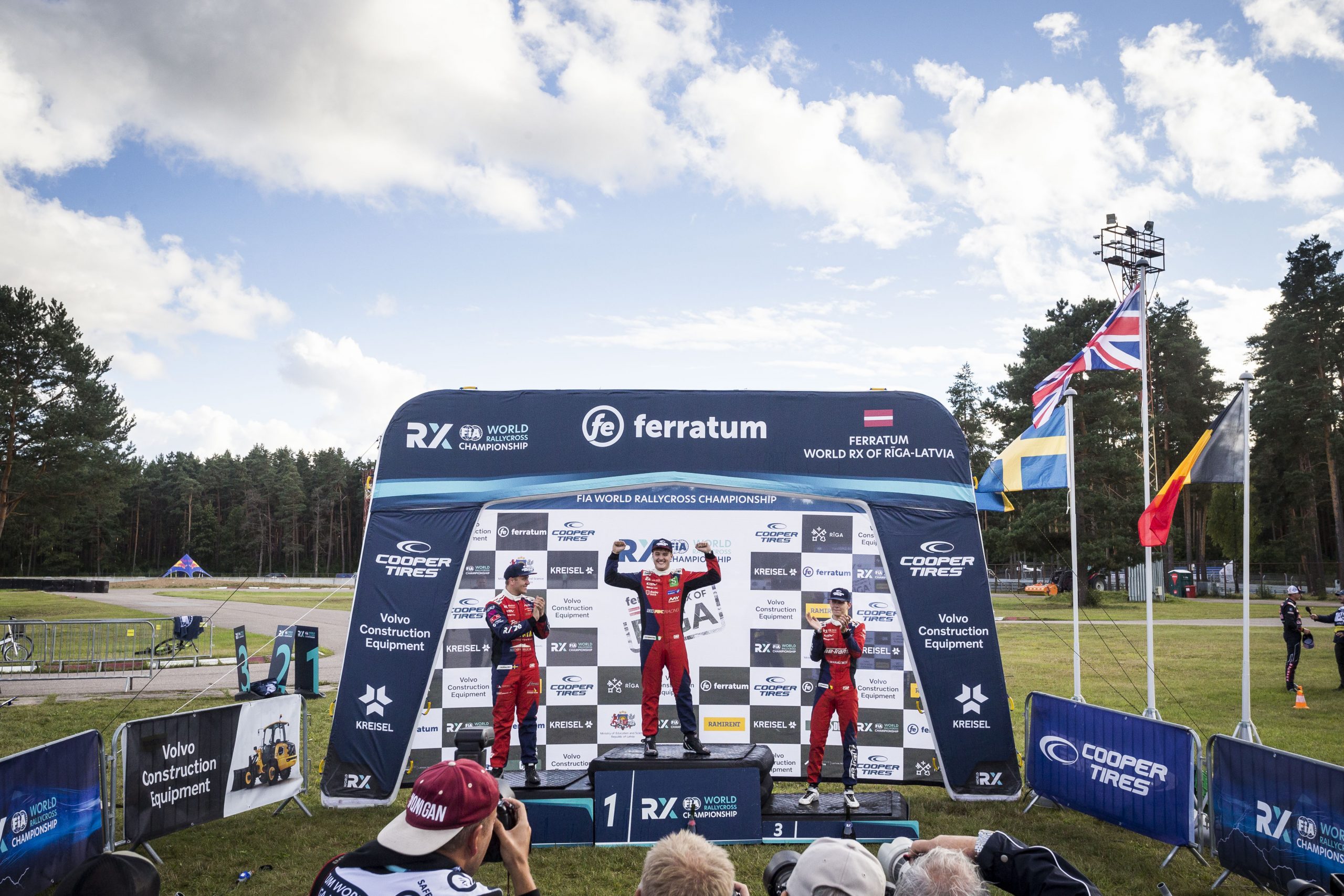 Third round of the season completed for the FIA RX2e Rallycross Championship, making its debut in Riga. The Bikernieki track, located in the heart of the Latvian capital, was the stage where Patrick O’Donovan took his first victory in the junior category of the World Championship, beating Isak Sjökvist and Viktor Vranckx, leader of the overall classification, in the Final.

With an uncertain weather, in which the rain alternated with the sun in short periods of time when the track was wet, the activity started on Saturday with the two Free Practice sessions and the first Heats. In the practice sessions, the RX2e drivers tried to fine-tune their cars on a track that was totally different from what they have seen so far this year.

The World Rallycross of Riga-Latvia started with a very strong Isak Sjökvist from the first sessions, setting good lap times that made him to be taken into account for the races. Indeed, the Swede was the best in Heat 1, in a race in which he imposed himself firmly on his rivals. Pablo Suárez managed to hold off both Viktor Vranckx and Nils Andersson. For his part, Raül Ferré took the win in his heat, successfully fending off attacks from Patrick O’Donovan, Filip Thorén and Roberts Vitols, the local hero.

In Heat 2, Vranckx won his heat with a pace that was matched by O’Donovan to enter the finish followed by Suárez and Thorén closing the group. In the second heat of this session, Sjökvist scored another win and took maximum points by posting the fastest overall race time, ahead of Vitols, Ferré and Andersson.

The intensity of Saturday’s battles gave way to another day full of spectacle and thrilling battles on track. With the enthusiastic crowd in the stands cheering on the RX2e drivers and cars, they took to the Latvian track in a wetter atmosphere to start Sunday with the warm up to get the first sensations of the day and take the pulse of Bikernieki again.

Once it was over, the rain made its appearance, wetting the track and prompting a series of quick decisions on set-up and tyres. All the drivers started Heat 3 on wet tyres, with Patrick O’Donovan winning the opening race, overcoming a perfect start from Pablo Suarez and a push from Nils Andersson and Roberts Vitols. In the second heat, Isak Sjökvist continued to write the script, with a new victory over Viktor Vranckx and ahead of Filip Thorén and Raül Ferré who, despite suffering an accident in the first corner, was able to continue in the race.

With these results, the Ranking was set to determine the participants of both Progression Races, which in turn determine who will compete in each Semi-Final. In the first of these intermediate races between the Heat qualifiers and the Semi-Final heats, Isak Sjökvist once again set the pace with a new victory, ahead of Raül Ferré, Roberts Vitols and Pablo Suárez. In the second, a touch from Nils Andersson to Viktor Vranckx conditioned their races by breaking the steering and rear suspension, respectively. Patrick O’Donovan crossed the finish line first, with Filip Thorén taking advantage of his rivals’ problems to finish second.

The key moment to determine the World Rallycross of Riga-Latvia in the FIA RX2e Rallycross Championship arrived with the always spectacular Semi-Finals. With rain as the main ingredient, the two races were high voltage and there was no shortage of surprises. With a light rain shower that dampened the track, Isak Sjökvist won the first one, ahead of a fighting Roberts Vitols in front of his home crowd. Both confirmed their place in the Final, while Nils Andersson was left waiting to see the result of the second round.

In the second semi-final Vranckx was unable to keep pace with the others and quickly fell back, with Ferré battling with Suárez. However, with the rain getting much heavier at this point, the Spaniard had an accident that knocked him out of the battle, with the Andorran gaining the position. O’Donovan took the race in his pocket and went through to the Final alongside Ferré, with Vranckx taking the final place as he had more ranking points than Andersson.

The Final promised strong emotions, and these were quickly confirmed. O’Donovan made a great start to take the lead, with Sjökvist close behind. Ferré, Vitols and Vranckx pushed from the first metres to get in front, with the Andorran having problems that put him out of action on the first lap, not completing the race. Sjökvist launched the strategic attack, being countered by O’Donovan and leaving Vitols in the lead and with room to go through the Joker Lap without losing first place. However, a technical problem forced him to stop, which was decisive for Patrick O’Donovan to take the victory in the World Rallycross of Riga-Latvia. Isack Sjökvist was second and Viktor Vranckx completed the podium in third place.

O’Donovan joins Vranckx on the winners’ list of this second year of the FIA RX2e Rallycross Championship. The junior category of the World Rallycross has now passed the halfway point of its season, heading to Belgium for the fourth round. The legendary Spa-Francorchamps circuit will host the RX2e drivers and cars on 8 and 9 October in a new electric racing adventure.