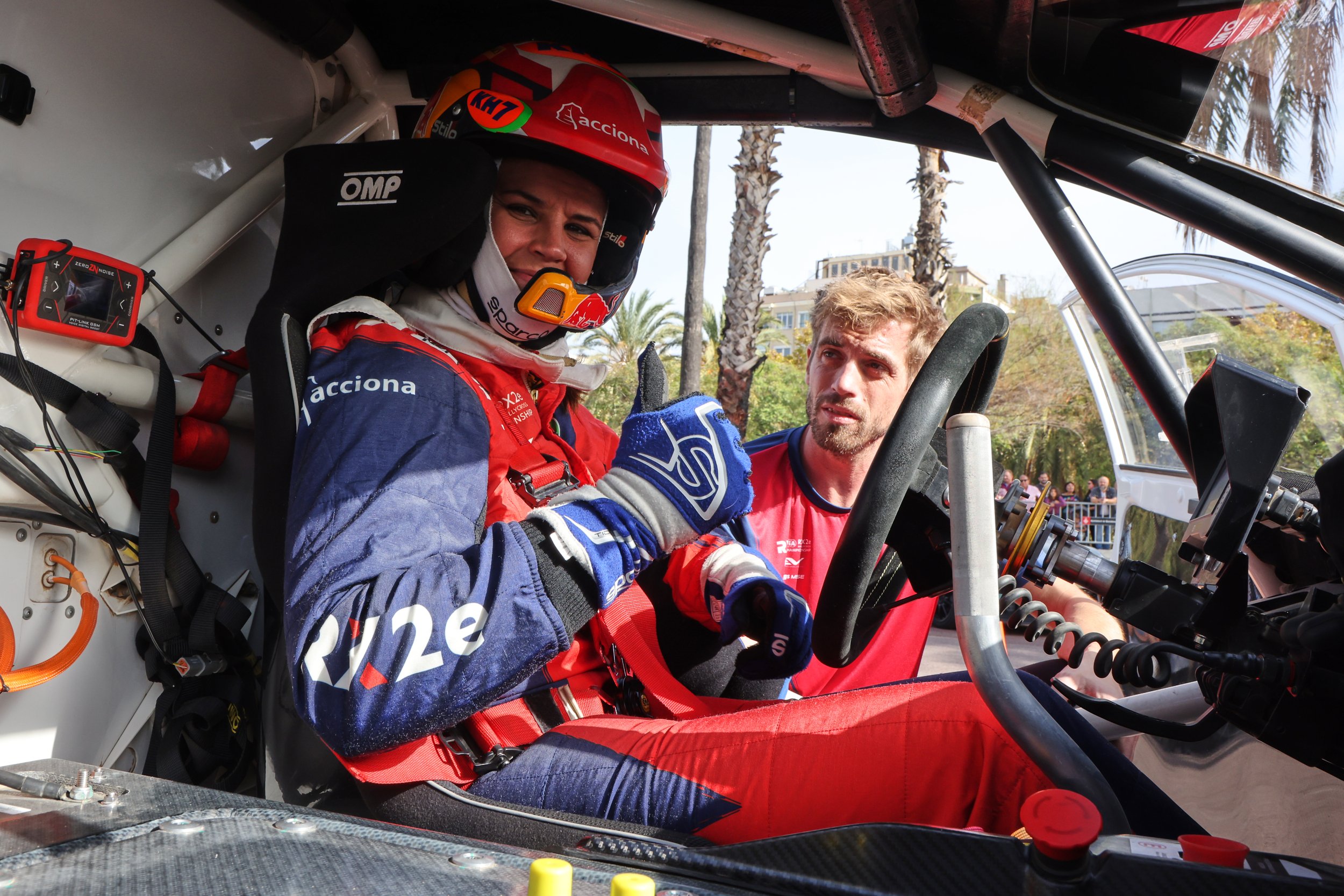 Laia Sanz, ready to fight in front of her fans

26 October 2022 – Click here to read this article in Spanish

Laia Sanz will be back this weekend at the World Rallycross of Barcelona-Catalunya at the wheel of an RX2e. The “Queen of the Desert” will be back in the car she raced in the first two rounds of the 2022 season, in Höljes and Hell, continuing her outstanding role in rallycross.

After concluding the presentation of the Spanish World RX event, we sat down with her to talk about her time in the FIA RX2e Rallycross Championship this season and how she has used rallycross racing as a training platform for her other sporting commitments. With Catalunya RX just around the corner, the Catalan driver has high expectations for her results at her home race.

“It has been a very nourishing and fun experience to race this season in the FIA RX2e Rallycross Championship. This 100% electric championship has been for me a training ground for the Extreme E competition in which I participate together with Carlos Sainz, in the Acciona Sainz XE Team. Throughout the year in RX2e, I have seen a remarkable improvement. I have gained a lot of experience in close fights with other drivers, as well as improving my handling behind the wheel of a 4-wheeler.”

“I can say that RX2e has helped me a lot, and it has also shown in the Extreme E races. I now feel much more comfortable riding with cars close to mine. In the same way, I’ve also made progress in my starts, my ability to react to the lights and overtake in the first – often crucial – moments of the race.”

“When I have races and important appointments, they are usually far away from home; I am really looking forward to this weekend and racing at home, in Barcelona, with my family and surrounded by my people and my fans.”

This weekend’s grid is very tight. There are big names in the line-up with a very high level and, added to the fact that all the RX2e cars are the same, it will be what we like the most: frenetic racing, lots of action on track and the uncertainty of knowing which drivers will go through to the final. Although on track each driver is going to do his job, when he gets out of the car there is a very good relationship between everyone in the paddock, which makes the races much more entertaining” concludes happily Laia.

She won’t be the only driver on Montmeló’s asphalt, since some familiar faces and new names will also join in for the season’s race. The new additions will get the chance to see a familiar face from the world of Formula 1 and the 24 Hours of Le Mans on the starting grid, such as Nick Heidfeld. The German driver, after a few years away from competition, returns to motorsports, making his debut in rallycross with an RX2e after his successful sports career in single-seaters and endurance.

With him, Spanish motorcycling rider Carlos Checa, Superbike World Champion, will try rallycross for the first time, taking a step forward towards four wheels similar to the one completed by his compatriot Laia Sanz. Youngster Pepe Arqué is the latest local addition to the grid, who already raced at the wheel of an RX2e at the last round of the inaugural season – Nürburgring 2021; all of whom make up the quartet of home drivers at the Spanish round of the contest.

The FIA RX2e Rallycross Championship returns to the circuit where it was born last year, the Circuit de Barcelona-Catalunya forming part of the history of motorsports, a must-see for the vast majority of international championships on both two and four wheels. Venue of the Formula 1 Spanish Grand Prix and Catalonia’s MotoGP Grand Prix, among many other prestigious races, it was inaugurated in 1991 and has formed part of the FIA World Rallycross Championship since 2015, the year that saw the launch of the RX track.

With just over 1,100 meters and taking advantage of the famous “Estadi” area, the Catalan rallycross track starts just before the well-known Turn 10, passing the first dirt sector where the famous jump is located up to Chicane RACC, where the Joker Lap can be found along the outside line. The drivers make the turn there to return on asphalt towards the second section on land which, after a series of swerves, faces the cars towards the finish line.

Taking as a reference the experiences of last year, when the RX2e debuted on the Barcelona track, the show is expected to flood the circuit with passion, with fans enjoying the race from the stands in the first 100% electric event of the Rallycross World Championship. Due to its design, this track hides some exciting secrets that set it apart, guaranteeing strong emotions and fierce fights in the Heats, Progression Race, Semifinals and Final.

All the action of the weekend of the FIA RX2e Rallycross Championship on Spanish soil, in which it shares the Circuit de Barcelona-Catalunya with the World Rallycross Championship (FIA World RX), can be followed live through the official platform RX+. All the sessions will be available, as well as exclusive content with analysis and interviews so fans can enjoy in HD all the action of the World RX of Barcelona-Catalunya.