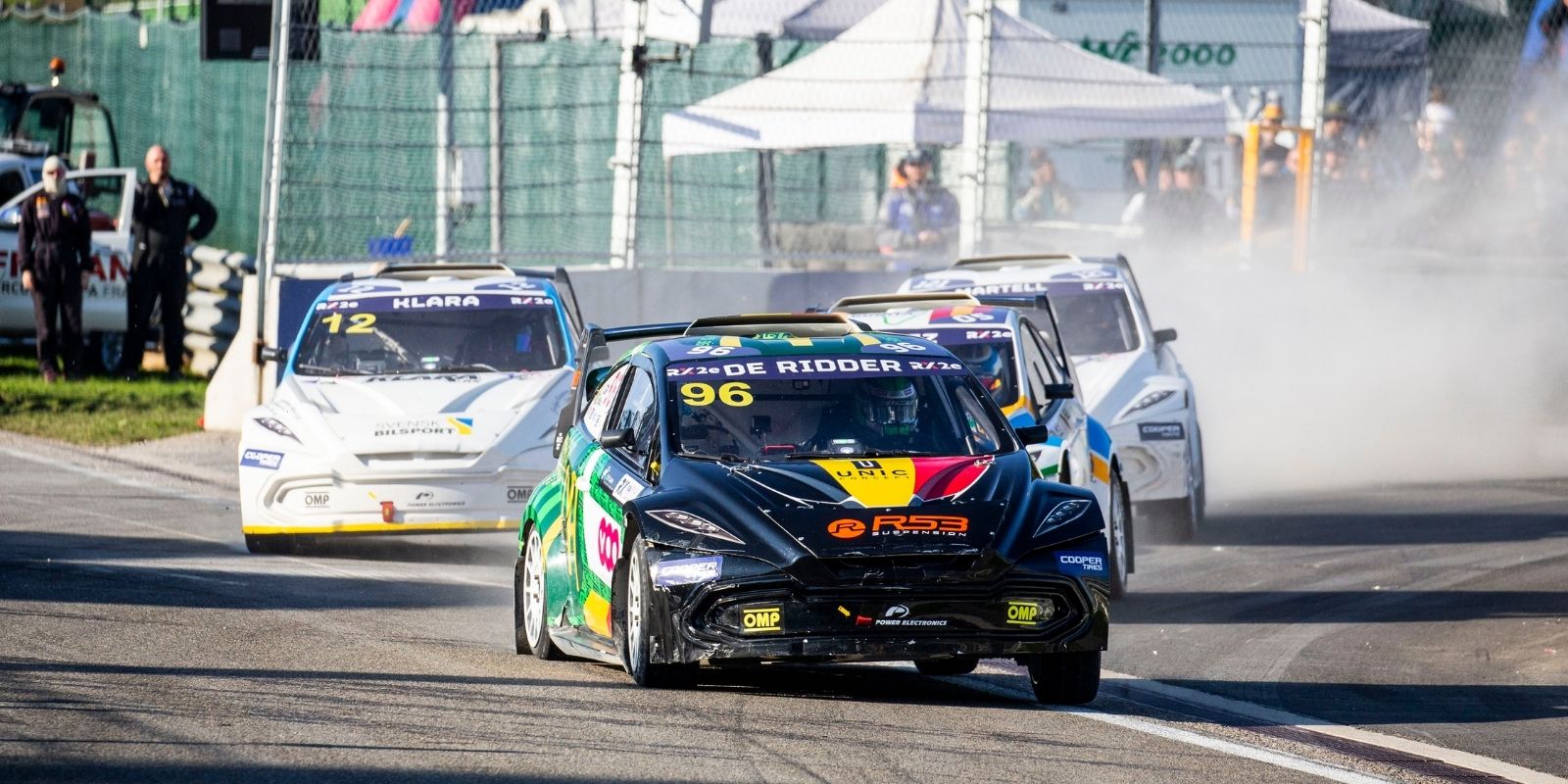 Guillaume De Ridder held off FIA RX2e Championship title rival Jesse Kallio to claim a superb victory at the Benelux World RX of Spa-Francorchamps, putting the Belgian in control of the title fight ahead of the season finale at the Nürburgring next month.

De Ridder battled back from a tough Saturday to seal a popular win and extend his lead in the Drivers’ Standings to nine points, while the ever-improving Swedish ace Isak Sjökvist came home third as the first-ever FIA electric rallycross championship served up spectacular action at the iconic Ardennes circuit.

Meanwhile, Klara Andersson impressed hugely on her RX2e debut with the Swedish racer setting third-fastest times in Q2 and Q3 on her way to a fourth-place finish.

Elsewhere, Patrick O’Donovan secured his first-ever qualifying race win in Q4 before suffering a nasty crash in the semi-final while rookies Christine GZ, Laia Sanz and Filip Thorén all showed dramatic improvement throughout their maiden electric rallycross event – with the latter even making the showpiece final.

Sjökvist was fastest out the blocks in Q1, posting the quickest time of the opening session ahead of Kallio and Andersson as De Ridder struggled to find clear air.

The top two then switched positions with Kallio taking the Q2 spoils – subsequently handing the Finn the overnight lead in the intermediate standings – while Pablo Suárez showed great pace to come third in the session.

Sat fifth at the start of Sunday, De Ridder had plenty of ground to make up but got his weekend back on track with consecutive victories in Q3 and Q4 under intense pressure from Kallio, who claimed Top Qualifier honours.

Both title protagonists won their respective semi-finals (although Kallio’s race was red-flagged following O’Donovan’s high-speed crash) to set up a mouthwatering face-off in the final, and it was De Ridder who won the sprint to turn one and held his nerve for a well-deserved second victory of the campaign.

Sjökvist completed the podium after a consistent weekend while Andersson just missed out on some debut silverware, having mixed it with the series regulars throughout the event.

Spanish ace Suárez capped a fine display with fifth in the final while Thorén kept out of trouble to record sixth on his international rallycross bow.

O’Donovan moves up to third in the overall standings despite his semi-final exit, having shown flashes of real promise throughout the weekend, while Christine ‘GZ’ Giampaoli Zonca demonstrated her versatility and off-road expertise by rapidly adapting to the demands of RX2e on her way to eighth.

Conner Martell endured another luckless meeting as the American was caught up in several incidents which again prevented him from showing his true pace and left him down in ninth overall, while motorcycle star Laia Sanz impressed with her steady improvement throughout the weekend and rounded out the 10-strong field.

Guillaume De Ridder said: “I was in trouble on Saturday, being held up in traffic during Q1 and Q2, but we won every heat today. The start was key in the final; I have been working hard on the set-up trying different things, and it paid off.

“It’s a really tough championship. These guys are really fast and we usually have roughly the same pace at every race, so it’s a matter of small details. The championship is not done yet and I expect a big fight at the Nürburgring.

“It’s an amazing feeling to win at Spa-Francorchamps. Every win is special but I have no words to describe this one. It hasn’t really sunk in yet, but it was amazing winning in front of all the Belgian fans at the most iconic track in the world. It’s a childhood dream come true.”

Jesse Kallio said: “It’s been a really enjoyable weekend. In the final Guillaume got a better start, and I tried my best to make the overtake but it’s really hard at this track.

“I’m a bit disappointed. I tried everything but it is so hard to overtake without the other driver making a mistake. The drivers make the difference, and a good start is really key in this class.”

Isak Sjökvist said: “It has been a really good weekend. To take P1 in Q1 felt great, but this time around both Guillaume and Jesse were just a little bit faster than me. All three of us have set the pace this weekend, but Guillaume found that extra tenth.

“It feels really great to come here as a rookie and score a podium. My development curve has been really steep this season, but I am actually a bit impressed with myself actually!

“It has always been a dream to compete among the best drivers in the world and RX2e is really showing off the pace all these drivers have. It’s no longer about not making one mistake in a lap, it’s about not making a mistake all weekend.”

The FIA RX2e Championship reaches its dramatic conclusion at the Nürburgring next month (November 27-28). You can watch every single race live on RX+, the new FIA World Rallycross Championship broadcast platform.