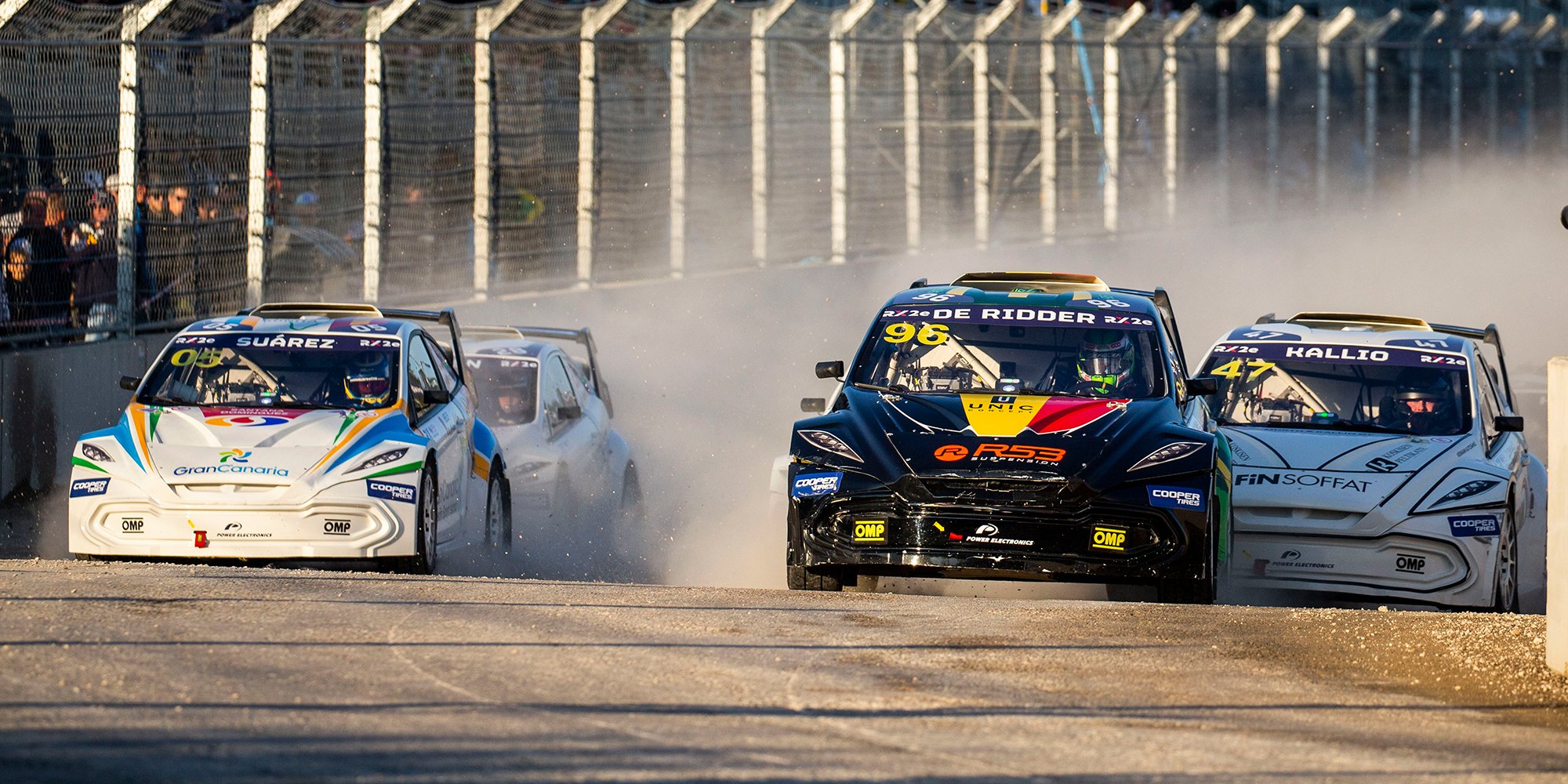 Down to the wire: De Ridder and Kallio set for title showdown at the Nürburgring

The 2021 FIA RX2e Championship is set for its grand finale at the World RX of Germany (November 27-28) later this month. A confirmed list of returning cast members from the series’ inaugural season are joined by a pair of newcomers, as the grid prepares to take to the world-renowned Nürburgring circuit.

Guillaume De Ridder has been the man to beat in the first-ever FIA electric rallycross championship. With commanding victories in the first and fourth rounds of the season and a further podium at Round 3, the Belgian ace holds the upper hand coming into the final round of the season.

In typical Finnish fashion, Jesse Kallio’s 2021 campaign has been quietly consistent appearing in each of the finals across the year. The 22-year-old claimed victory at Höljes and followed De Ridder home at Spa-Francorchamps, leaving Kallio just nine points shy of the summit of the standings.

Patrick O’Donovan kicked off his season with a third-place finish and some well-earned silverware at the opening round in Spain. The Irishman has since followed up with a sixth in Sweden and more points to add to his tally in the subsequent rounds to lie third in the overall table with 59 points.

Drawing level with O’Donovan to sit-joint-third in the Drivers’ Standings, Pablo Suarez has been accruing points across the season. Owing to final appearances at the first event of the year as well as last time out in Belgium, the Spaniard will be looking to cap off the season with another strong showing.

Despite missing the opening round of the season, Isak Sjökvist holds a commendable fifth place in the championship. A podium at his home round of Höljes was swiftly followed up by another final appearance in France and yet another rostrum at Round 4 in Belgium.

Klara Andersson returns for a second attempt at reaching the RX2e podium following a spectacular debut at Spa-Francorchamps. The Swede was on the pace from the outset and narrowly missed out on a top-three finish, ending the weekend in fourth behind compatriot Sjökvist.

Similarly, Filip Thorén impressed on his all-electric rallycross bow at Round 4. The 19-year-old rookie remained consistent through his first-ever weekend in the series to reach the all-important final, eventually finishing sixth on the road but gaining vital experience ahead of his return in Germany.

The first of Round 5’s newcomers is Kobe Pauwels, 2021’s Euro RX3 runner-up joins the grid fresh off the back of an eye-catching first season on the World RX package. The 17-year-old has high hopes of a strong result against stiff competition.

The ninth driver to join the fray at the Nürburgring comes in the form of Pepe Arqué. The Spaniard brings with him a wealth of experience in national CrossCar championships and in RallyX Nordic’s single-make support series, RX Academy.

Guillaume De Ridder said: “I’m feeling quite relaxed, because it is better to have a nine-point lead than to be nine points back! I have that advantage, but nothing is done yet. It is only a small advantage and anything can happen.

“I am going to the Nürburgring with the same goal that I have at every other race – to win. To win a championship you should try and win races. I have learned a few things from my near misses in RX2 – you should just give everything you have, and not try and do any calculations regarding points. The second thing I have learned is that it is always better to come to the final race with a points advantage!

“Jesse [Kallio] and I have some similarities, but also some differences. He is a very consistent driver, and he has been strong all season. Occasionally I have had a slight advantage on outright pace, but it’s really close. That means I have to always try and maximise the smallest details, and I am constantly working with my engineers to find improvements. We have a lot of similarities – we are both consistent and quick, so it is all about the details.”

Jesse Kallio said: “This season has been great. In the summer I didn’t even know if I’d be racing in this championship and now I have done all of the races so it’s been enjoyable. The win at Höljes was of course the highlight for me but we’ve had plenty of other good results too. I was a bit disappointed to lose it [the win] at Spa in the final to Guillaume [De Ridder] but we’re still in the fight which is the main thing. It’s been so tight all year and everyone has the same equipment, so you have to be perfect to win. In a single make championship like this, it’s all about the small details.

“The gap is quite big but the plan is to get the maximum points and then all we can do is see how Guillaume does. Of course, it’s going to be a big challenge and I think we’ll need luck to be on our side in Germany if we’re going to win. I’m going there to focus and win the race and see what happens from there.

“It’s been a really enjoyable fight with De Ridder, we’ve been close all year and it seems one of us has the upper hand at one track and the other has the advantage somewhere else. I’m going to treat the last race like it’s one event and not feel any pressure for the championship, we need to go there and get the absolute maximum from the race and not stress too much about points.”

“The fight is going to be decided in the last race which always adds extra excitement to the season finale. Guillaume and Jesse have put in some great performances this year so it’ll be interesting to see who comes on top. It’s not just the title that is up for grabs though, third, fourth and fifth in the championship are separated by three points so the battle for third-place overall is going to be great to watch as well. As usual, they are joined by a hugely talented line-up of drivers who will also be in the mix and looking to finish the season strongly.”

Racing is set to begin on Saturday, 27 November, with all of the action across the board to be livestreamed in HD quality via the cutting-edge new RX+ broadcast platform. This premium production will grant subscribers unparalleled and unprecedented access anytime, anywhere and on any device, offering a choice of viewing angles, in-depth expert analysis, special behind-the-scenes features and exclusive interviews.

Both the Full Season Pass and the Event Pass for World RX of Germany are available for €7,99. For more information or to subscribe, click here.

Tickets to World RX of Germany can be purchased here.