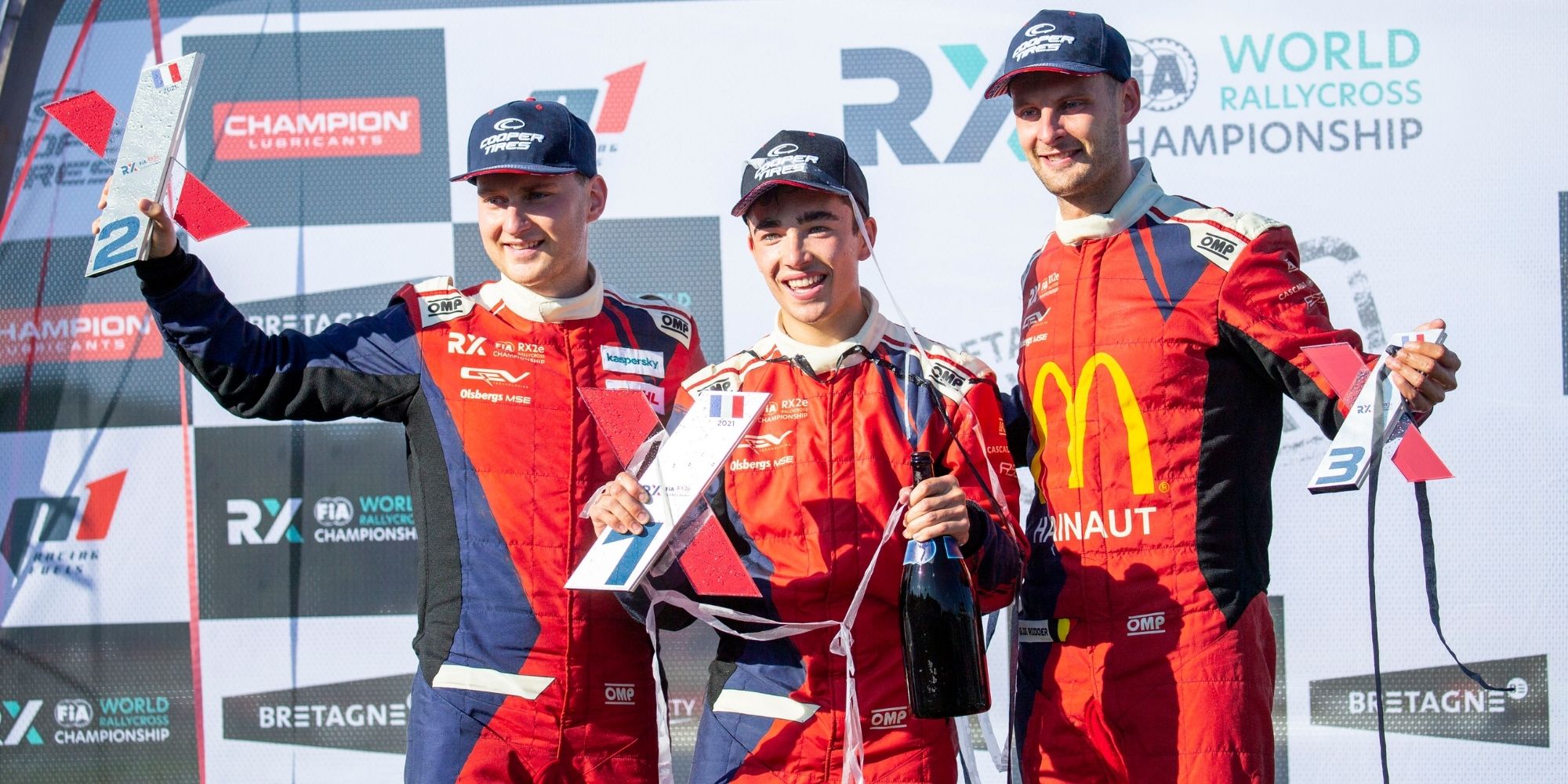 Deslandes: I will remember Lohéac win for the rest of my life

Dorian Deslandes stunned the rallycross world with victory on his FIA RX2e Championship debut at Lohéac earlier this month, and the teenager is still coming to terms with his landmark achievement.

The French youngster was one of four new faces joining the first-ever electric FIA rallycross championship for Round 3 in Brittany, and he made the most of fresh tyres and a favourable grid draw to secure two qualifying session wins before victory in his semi-final set up a shot at glory for the home hero.

And Deslandes duly delivered, with the 18-year-old holding off Reinis Nitišs and Guillaume De Ridder to spark jubilant scenes among the partisan crowd.

Speaking a week after his international rallycross bow, Deslandes said: “To be honest with you, I still haven’t had a chance to analyse my performance yet. It was such an intense weekend!

“When I arrived at the circuit on Friday morning, I was not thinking about winning. My participation was at the last minute and I felt very lucky to be included in the entry list.

“Initially I just wanted to take advantage of every second in the car, but it was after Q2 that I revised my goals upwards. To be in the lead on the evening of the first day of competition, in front of Cyril Raymond (a 1-2 for France!) and Reinis Nitišs was just incredible for me.

“The next day when I arrived at the track, I tried not to think about the final result. I continued on with my rhythm without making mistakes and I topped the Intermediate Standings, won my semi-final and then the final!

“What a weekend! Being French and winning at Lohéac is just amazing. It is a day that I will remember for the rest of my life!”

Deslandes, who began his motorsport career in karting before switching to rallycross in 2019, also has experience rallying while the Cherbourg native spent valuable time learning from driving instructor, mentor, friend and fellow RX2e Lohéac competitor Raymond at the Circuit Paul Ricard earlier this year.

The pair went head-to-head at Lohéac, and it was the young apprentice who stood on the top step at the end of the weekend – despite a rapid showing from 2017 RX2 champion Raymond.

“When Dorian started in Rallycross, I was sure he was going to drive fast – but maybe too fast at times,” explained Raymond. “Dorian has progressed naturally rapidly, and when you explain something to him once he just executes perfectly!

“I was sure he was going to perform at Lohéac, but to win there you have to be really talented. He still has work to do though, because I am still fastest over a single lap!”

Deslandes was quick to praise the RX2e ‘arrive and drive’ set-up, with the all-electric championship – a collaboration between QEV Technologies and Olsbergs MSE – providing a platform to show off his talents.

“I felt at ease within the RX2e team from the very first day,” explained Deslandes. “It’s not simply a team; it’s a family and it shows! They listened to me all weekend and we all know the driver is nothing without his team. Thanks to them for their work.

“As for the car, it is brilliant! I didn’t think I was going to have so much fun driving an electric car but there is so much power, and when you compare the lap times with the World RX category we were really in the game.

“I would like to thank QEV Technologies, Olsbergs MSE and the entire RX2e team. I hope I will have the opportunity to be able to work with them again before the end of the season!”