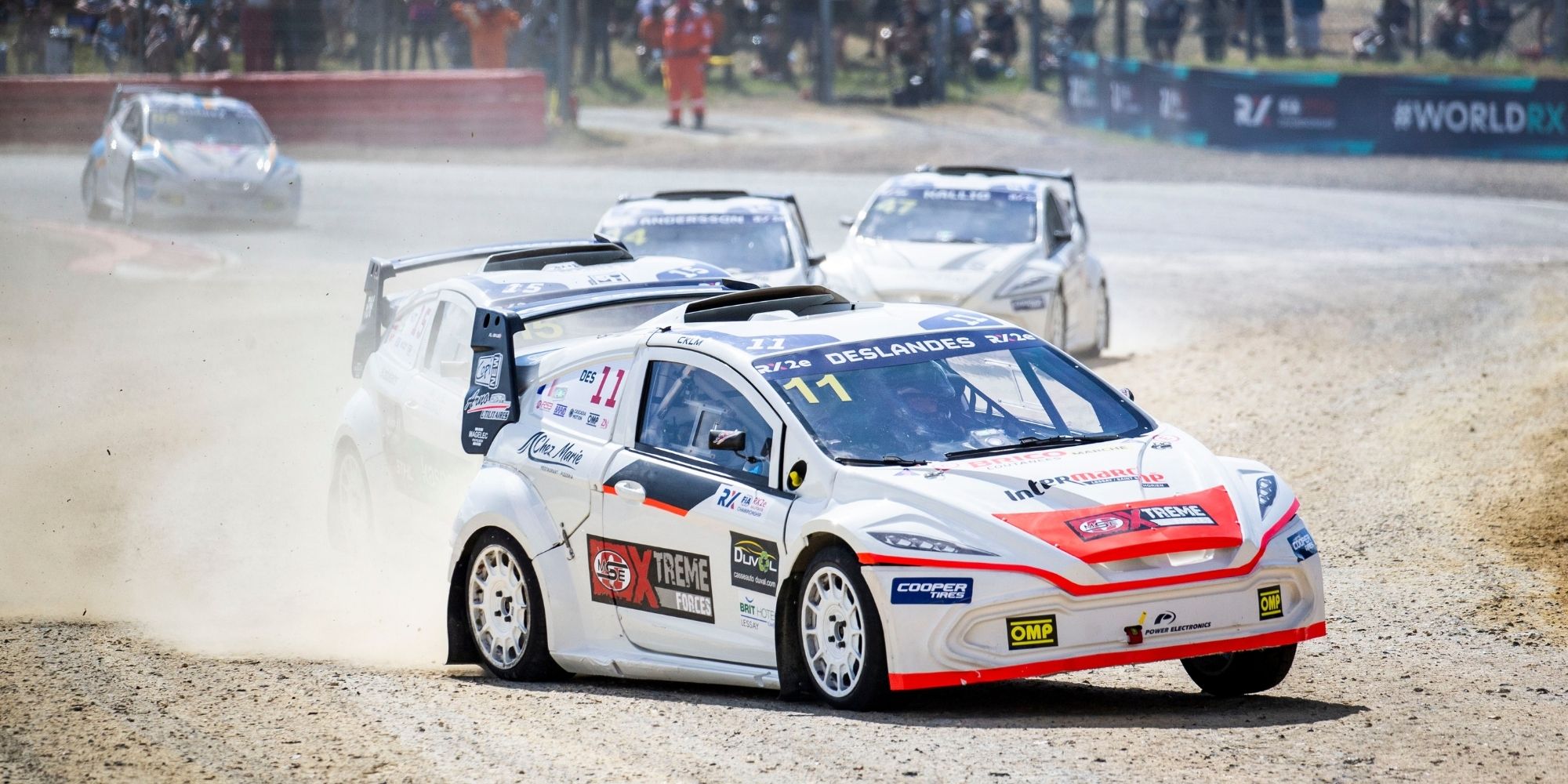 Dorian Deslandes stunned the rallycross world with a spectacular victory on his FIA RX2e Championship debut at the Bretagne World RX of Lohéac.

Jesse Kallio came home fourth ahead of the impressive Conner Martell while Isak Sjökvist rounded out the top six on a hugely-entertaining weekend of action produced by the first-ever FIA electric rallycross championship.

The result sparked emotional scenes at the iconic Brittany circuit, with Deslandes jumping onto the roof of his car and taking in the adulation of the partisan crowd while a visibly-emotional Cyril Raymond, mentor to the young French prodigy, looked on.

It wasn’t Deslandes but Martell who initially caught the eye in Q1 on Saturday morning, rocketing into the lead from pole position. However, a radio fault meant the American failed to take his obligatory joker and was handed a 30-second penalty.

That saw De Ridder inherit the win ahead of Raymond, but neither driver could match Deslandes’ time in the second race of the session as the youngster held off Nitišs and Kallio to get his weekend off to a perfect start.

Deslandes then doubled up with a lights-to-flag victory and the fastest time in Q2, while there was more misery for Martell as the 2018 ARX2 title-winner – who posted the third-fastest time in the session – was disqualified for driving with non-homologated race boots.

At the start of Q3 Raymond, who has helped nurture and develop Deslandes throughout his fledgling career, put a forceful move on his protege and then pulled away at the front of the field to claim victory.

However, the 2017 RX2 champion was not fast enough to beat a scorching time set by Nitišs in the other race and the Latvian’s session win helped elevate the youngest-ever FIA World Rallycross Championship race winner into the top three overnight.

Standings leader De Ridder set the pace in Sunday’s warm-up and converted that potential into a Q4 session win, utilising an early joker to avoid traffic before hunting down Nitišs and taking the lead when his rival took his own compulsory longer tour.

Deslandes was third fastest after the French teenager executed his joker strategy perfectly to hold off Kallio in the other race, securing the Top Qualifier spot for the home hero.

And things got even better for the 18-year-old in the semi-finals when he beat Nitišs off the line and kept his nose clean to book a spot on the front row for the main event while Kallio was third.

Meanwhile, De Ridder fended off an audacious all-or-nothing move from Raymond into turn one – which left the Frenchman ploughing through the gravel trap – and proceeded to comfortably manage the pace on his way to a semi-final victory.

Martell profited from Raymond’s ambition to finish second on the road and complete an impressive comeback after his Saturday troubles, while Sjökvist withstood a hard-charging Raymond to also make the final.

Lining up on pole in the last race of the weekend, Deslandes once again made the perfect start to lead into turn one while De Ridder found himself shuffled out wide by Nitiss.

Kallio took his joker from fourth on lap one in order to get out of traffic, but De Ridder covered off the undercut attempt soon after and that in turn triggered Nitišs to follow suit. Deslandes took advantage of the clear air out front to stretch his legs, and the teenager duly completed his joker lap on the final tour to emerge in front of Nitišs and claim an immensely popular victory.

De Ridder’s podium sees him stretch his championship standings lead over Kallio to seven points, while fifth-place Martell will be encouraged by his pace on debut in all-electric machinery.

Sjökvist was quick all weekend but struggled to make an impact in the final while local hero Raymond finished seventh ahead of Swedish ace Nils Andersson, who was caught in traffic on numerous occasions.

Meanwhile, Patrick O’Donovan showed flashes of pace but suffered an unfortunate spin during the joker lap in his semi-final which put paid to hopes of repeating his Barcelona rostrum appearance.

However, the youngster remains fourth in the overall standings while Pablo Suárez is fifth as the Spaniard continues to demonstrate dramatic improvement during his first season of international rallycross with another quietly impressive weekend against a high-quality field.

Dorian Deslandes said: “This was an amazing weekend, although I am very disappointed not to share the final race with my friend Cyril [Raymond]!

“Yesterday was amazing, and today is a dream. It is not easy to race at home, or to keep these guys [Reinis Nitišs and Guillaume De Ridder] behind me, but I stayed strong in my head and did the job.

“I am really, really happy. I want to thank all the FIA RX2e team and Olsbergs MSE. It is thanks to them that I am sitting here today.”

Reinis Nitišs said: “It is nice to be back! I have been in and out of this paddock since 2013 and I have always been fighting with the top guys to win races. I have had a bit of a break to do some rallying and crosscar, but I am back in business now so this weekend was nice.

“I soon got into a rhythm and realised that not much has changed – you have to give your maximum in order to be at the top. These cars are so similar so a lot depends on the driver.

“Dorian drove brilliantly, and it was really tight but he did well. I did everything I could with the car before the final, and we were ready to fight. It was a weekend full of emotions.”

Guillaume De Ridder said: “I had a slight disadvantage compared to the newcomers, as they had four new tyres, but they used it very well!

“Hats off to Dorian because he drove perfectly while Reinis was also a very strong competitor this weekend. It was tough, and a matter of being patient during the qualifying sessions while trying to run on old tyres. In the final we had the pace to win, but the start was quite difficult on the wrong side of the grid.

“When I’m racing, I am racing to win – not to finish second or third – but these are good points for the championship. In Spa I want to finish on the top step!”