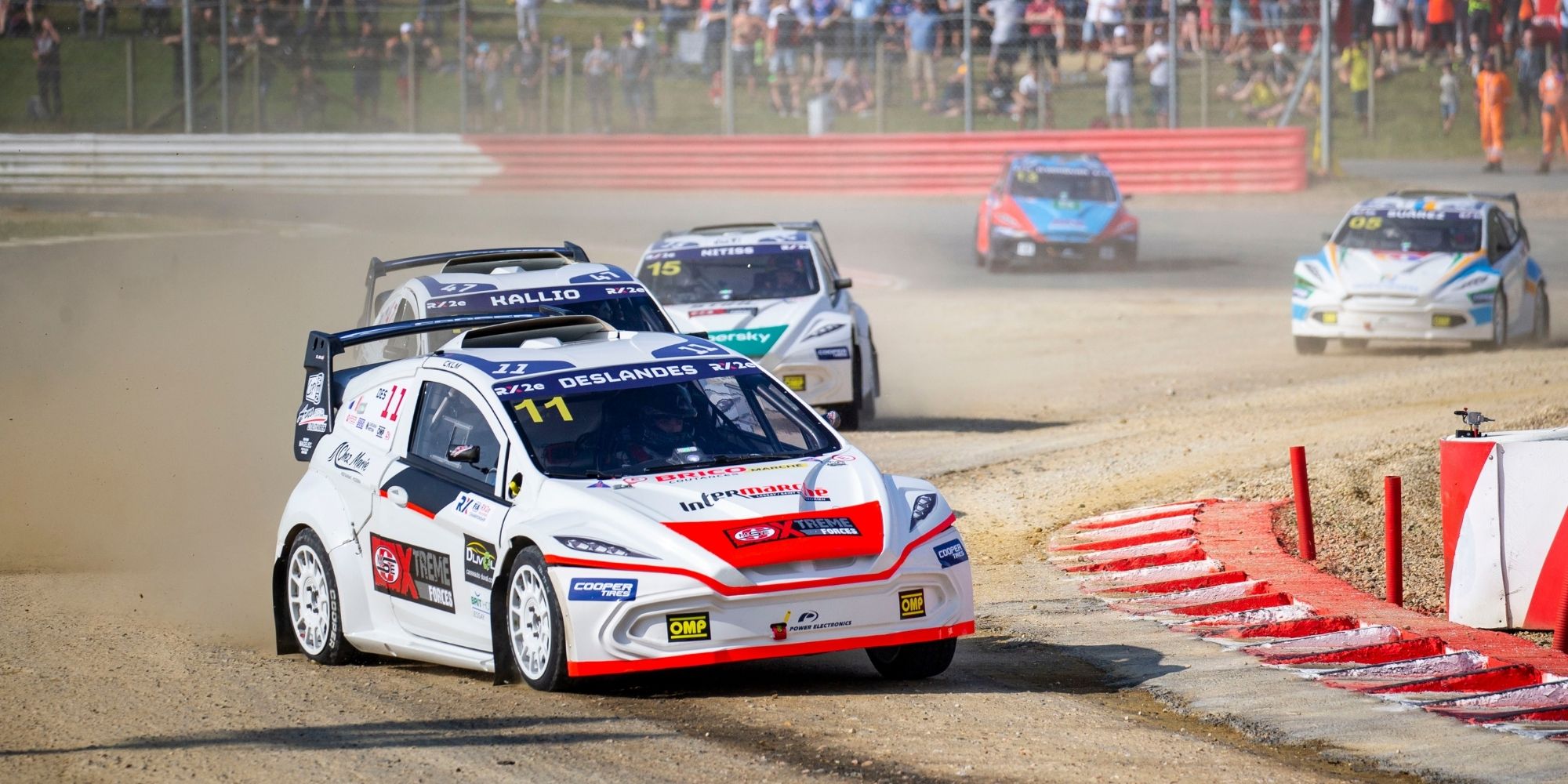 Dorian Deslandes is primed to cause an upset on his FIA RX2e Championship debut after a stunning performance during day one at the Bretagne World RX of Lohéac.

The French teenager posted the fastest times in both Q1 and Q2 before finishing sixth in Q3 to hold an impressive overnight lead midway through Round 3 of the first-ever FIA electric rallycross championship.

Deslandes showed a clean pair of heels to a talented field that includes mentor and friend Cyril Raymond, with the former RX2 champion sat second in the intermediate standings following his own successful bow in all-electric machinery.

It was initially Conner Martell who caught the eye in Q1, rocketing into the lead from pole position, but the American failed to take his obligatory joker and was handed a 30-second post-race penalty. That saw De Ridder inherit the race win ahead of Raymond, but neither driver could match Deslandes’ time in the second race of the session.

The French teenager displayed experience beyond his years to comfortably convert his inside grid slot into a turn one advantage, holding off youngest-ever World RX winner Nitišs in the process as the Latvian attempted an audacious move around the outside. Deslandes then kept his cool to lead home Kallio as the pair topped the timesheets.

There was more of the same in Q2 with Deslandes leading his race from lights to flag, holding off the hard-charging trio of Raymond, De Ridder and Kallio despite rear bumper damage from first-corner contact.

Martell impressively won the earlier race in the session to post the third-fastest time but was later disqualified for driving with non-homologated race boots, putting the 2018 ARX2 title-winner up against it if he is to stand on the rostrum this weekend.

That disqualification moved Nitišs into pole position for the opening race of Q3, and the Latvian took full advantage to set a scorching time ahead of Patrick O’Donovan during an untroubled run to the flag.

And that benchmark proved impossible to beat as the leading protagonists put on an entertaining show in the second race of the session. Raymond went door-handle-to-door-handle with his prodigy Deslandes off the line, eventually getting the move done out of turn three, while De Ridder ducked out of traffic on lap one with an early joker.

The decision payed dividends as the Belgian proceeded to pick off Sjökvist, Kallio and Deslandes when they all took their longer tours, although Raymond proved out of reach.

Deslandes holds a nine-point advantage over compatriot Raymond in the intermediate standings, while Nitišs is a point further back with Q4 still to come tomorrow.

De Ridder and Kallio round out the current top five while Höljes podium-finisher Sjökvist and fellow Swede Nils Andersson are next up, level on points after showing promising pace today.

Patrick O’Donovan endured a frustrating day but will have been heartened by second place on the road behind Nitišs in Q3 while Pablo Suárez has shown he can mix it with the leading lights in the category as he once again showed his quality on an unfamiliar track.

And Martell has it all to do at the foot of the standings after a tough RX2e debut but will have been encouraged by his evident pace – demonstrated by the third-fastest time in Q2 – and is still in with a chance of causing an upset if he puts in a strong Sunday performance.

Warm-up gets underway at 8.30am (CEST), with Q4 taking place at 11.00am before the semi-finals at 3.32pm. All races are available to watch live on the FIA World Rallycross Championship broadcast platform RX+, while the final will also be shown as part of a free live broadcast on Red Bull TV from 5pm.