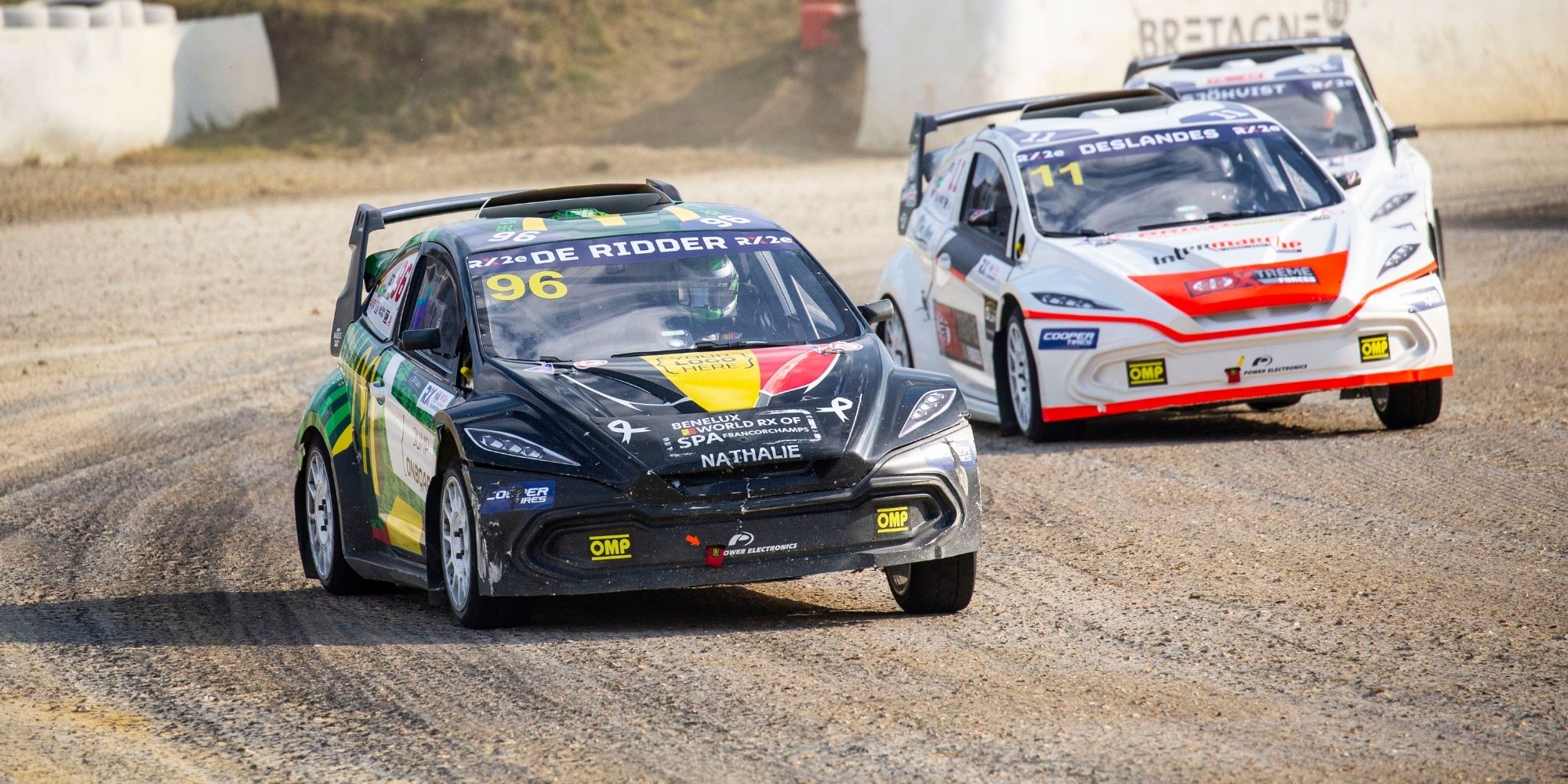 Guillaume De Ridder is top of the RX2e Drivers’ Standings with two rounds of the inaugural season remaining, but the Belgian knows there is plenty more to do if he is to make history and claim the first-ever FIA electric rallycross championship.

The 28-year-old has already written his name into the record books by winning the very first race in the new series, completing a clean sweep in Round 1 at Barcelona, and De Ridder backed that up with fourth place at Höljes – despite a puncture in the final – and third last time out at Lohéac.

That consistency has moved him seven points clear of closest rival Jesse Kallio in the overall standings, but De Ridder has promised that he will not change his approach to racing despite having a lead to protect.

“I have been quite pleased with the season so far,” he said. “It went really well in Barcelona – you cannot complain about a clean sweep! It was a flawless weekend, but it was also a learning weekend as well. I had a few test sessions before Barcelona but nothing is comparable to a race weekend.

“We then went to Höljes and obviously it was not as flawless! The starts were amazing every single time but the rest of the races didn’t quite work as expected. We had small issues in every single qualifying session – bent wheels, punctures, contact at the start – so it was a bit more difficult. I ended up learning the track conditions and pushing properly in the semi-final because of all the other problems.

“It was a bit of a tough weekend but that is sport, and that is where you need to be strong. The championship is won in the difficult moments, not when it is going well. I only picked up two points in the final, but it was two points that could be important in the championship fight.

“In Lohéac it was also a strange weekend due the wildcard entries all having new tyres on an abrasive track. That played a bigger role than it would at other tracks, so it was a case of limiting the damage, scoring as many points as I could and waiting for their tyres to wear.

“For me, Lohéac was the best weekend I have done this season even though the race results were not as spectacular as Barcelona. I was really pleased with the car, as we made some adjustments on the set-up which I will keep for the rest of the year. I am never usually satisfied with my performances because I am a perfectionist, and I think we can always do better, but in Lohéac it was not far from being perfect.”

Following his lightning start to the season, De Ridder has had to cope with a number of minor setbacks but refuses to get down about his luck.

“I have been used to disappointing results like Höljes, but what is in the past is in the past,” he said. “You can never change it so all you can do is focus on the next race. The championship is so tight, and while I did a big part of the job in Barcelona, it is easy to see how one difficult race can erase everything you have done in the past.

“I will not drive any differently despite leading the Drivers’ Standings, because I have learned in the past that the best thing to do in order to win a championship is to try and win races. That is the best way to score points and extend a lead. I will do everything I can to win in Spa, and it is also my home event so it gives me extra motivation to be on the top step!”

While De Ridder is currently leading the RX2e standings, the former World RX driver has not had everything his own way with Kallio and Fraser McConnell setting the pace in Sweden before series newcomers Dorian Deslandes and Reinis Nitišs finished first and second in France.

“Since day one the competition has been really tough,” he said. “Barcelona was a high level but from Höljes onwards the field was tighter and the competition level increased. I haven’t faced the level of competition I faced in Lohéac in a long time. It was amazing. You had 10 drivers within two or three tenths, so it was intense. Fighting against such great drivers adds value to the championship.

“Claiming the first-ever RX2e title has obviously been the goal since I became involved in the project. I’m never competing to finish second. It is too early to really talk about winning but if it happens, it would mean an awful lot to me.

“To be the first-ever FIA electric rallycross champion would be making history. It was special to win the first event in Barcelona for that same reason, but I didn’t want to just stop there. It would be a great achievement after all the efforts I have had to make to be on the grid. It has been a long, long, long winter with a lot of short nights, so this would mean a lot to me. It is the main target and the main focus.

“I think the RX2e car has performed above my expectations. It is a great piece of engineering from QEV Technology and Olsbergs MSE. With brand-new technology, you expect some minor technical issues, but it has been three races and we have yet to have any issues with the car. Hats off to them, because you expect some small details to go wrong and that has not been the case.