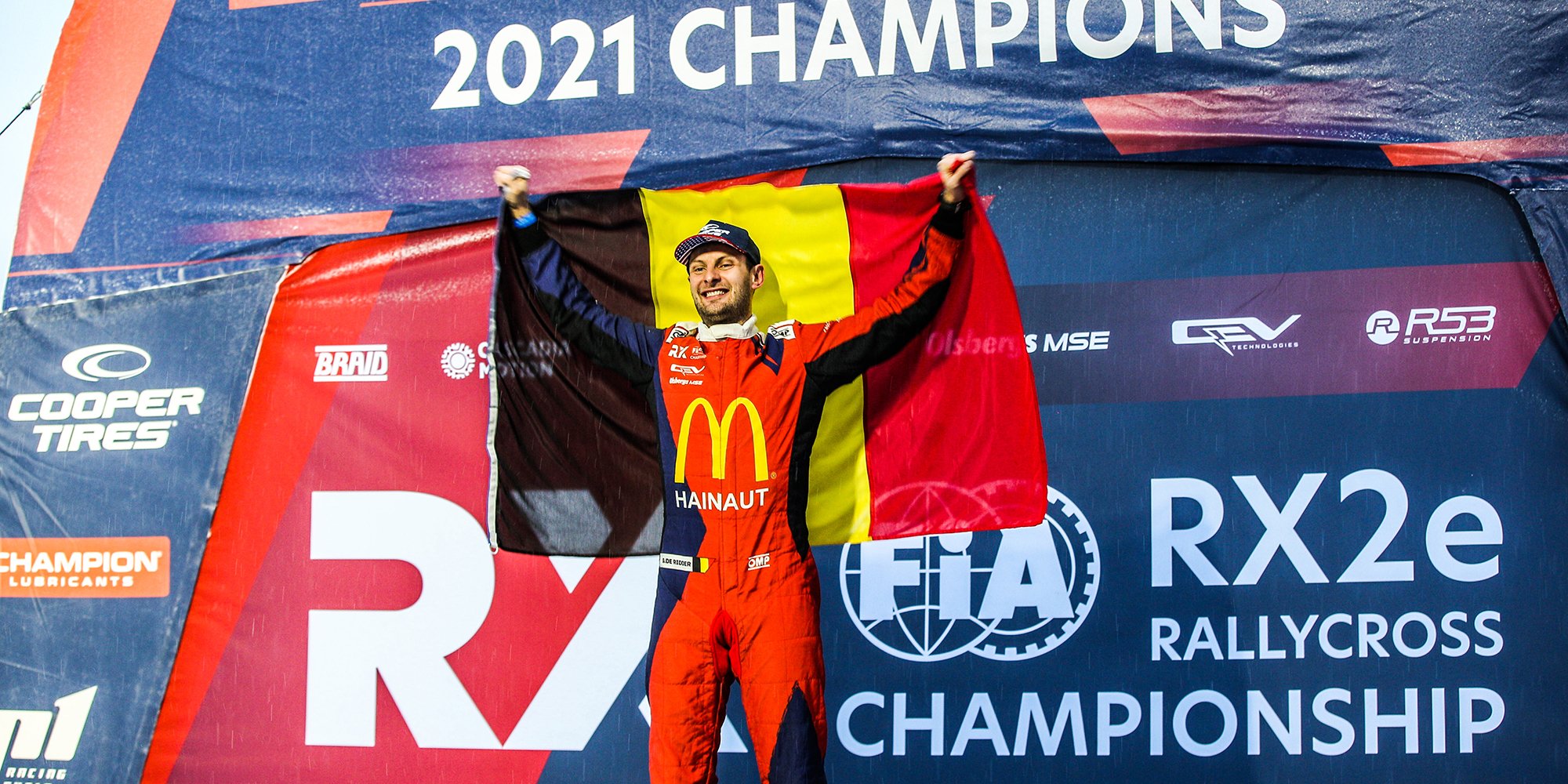 Guillaume De Ridder claimed the first-ever FIA electric rallycross championship title in spectacular fashion following a season-long battle with Jesse Kallio, who pushed the Belgian all the way to the final flag at the Nürburgring.

With a nine-point advantage in hand entering the final weekend of the season, De Ridder was the firm favourite to seize the inaugural honours, but he still had to get the job done when it mattered most and he did just that.

Following a dominant display in the Qualifying and Semi-Final stages from title rival Kallio, the Finn faltered at turn one in the final, spinning out of contention while De Ridder surged into a lead that he refused to relinquish.

Kallio, meanwhile, utilised a tactical joker lap strategy on the second tour, and a swathe of fastest laps, setting the pace as he had done all weekend to recover brilliantly to second on the road and ultimately, secure the runner-up spot in the overall standings.

A first podium of the season for Pablo Suárez signalled his best result of the year as well as settling the hotly contested battle for third place overall, which the Spaniard duly claimed after a hugely impressive event.

The RX2e debutants also enjoyed stellar weekends with both drivers making it to the all-important final. The first of which was Kobe Pauwels who kept pace with the front-runners for much of the competition, eventually taking fourth place just five-hundredths of a second behind Suárez.

Having missed the first round in Spain, Isak Sjökvist capped off a strong weekend, and indeed a strong season with fifth in both the final of Round 5 and the championship standings.

The second of the series’ newcomers, Pepe Arqué also enjoyed an impressive first outing to make it into the final, placing as high as third in Qualifying 1.

Those that failed to make the cut for the Final highlight the championship’s fiercely contested nature, with Semi-Final 1 sealing the fate of Patrick O’Donovan who spectacularly crashed out of contention – ultimately costing him third in the standings – and Swedish youngster Filip Thorén. Compatriot Klara Andersson also fell short of a place in the final after setting eye-catching lap times throughout the weekend.

Guillaume De Ridder said: “It’s been a really tough weekend. I had a lot of pressure on my shoulders because I needed to avoid any mistakes. I was kind of safe coming here with the points situation in the championship but I couldn’t afford any big mistakes so I took it really easy in qualifying avoiding all the kerbs so I didn’t get any punctures.

“The level has been so high this season and Jesse [Kallio] and I have been fighting for wins the whole season so it’s been the small details that have made the difference. I think he deserved the win this weekend as he’s been quicker than me throughout but that’s racing sometimes. Even when we have had newcomers, they have been super quick like in Lohéac for example so it’s been intense.

“It’s not been easy not going flat out this weekend, it’s against my nature but it paid off in the end! I think I’ve gathered a lot of experience for the set-ups of electric cars as World RX makes the switch next year so hopefully that comes in handy.”

Jesse Kallio said: “The whole season has been really enjoyable, especially the fights with Guillaume [De Ridder]. Coming here I had only one goal and that was to get the maximum out of the weekend as that was the only chance we had in the championship.

I’m very happy with the speed I’ve shown in Germany, I was setting the pace for most of the event but just got a bit unlucky in the Final. It’s been really tricky to start from pole all weekend so I didn’t get the best start but then I got hit at the rear and from then I was P4, I tried to get my head down but had a slow puncture so it wasn’t easy!”

Pablo Suárez said: “Anything can happen in the Final. I was at the back and waiting for something to happen and I saw my gap and went for it. It was a very tight race and I’d say it was my best this season, it’s made even better as this weekend didn’t start the way I’d hoped.

“I’m coming from a rally background so not having a co-driver is something that’s new for me! I had to work on managing the events as the action all happens very quickly so that was probably the most difficult part for me. To achieve this result is really awesome – I can’t believe it!”