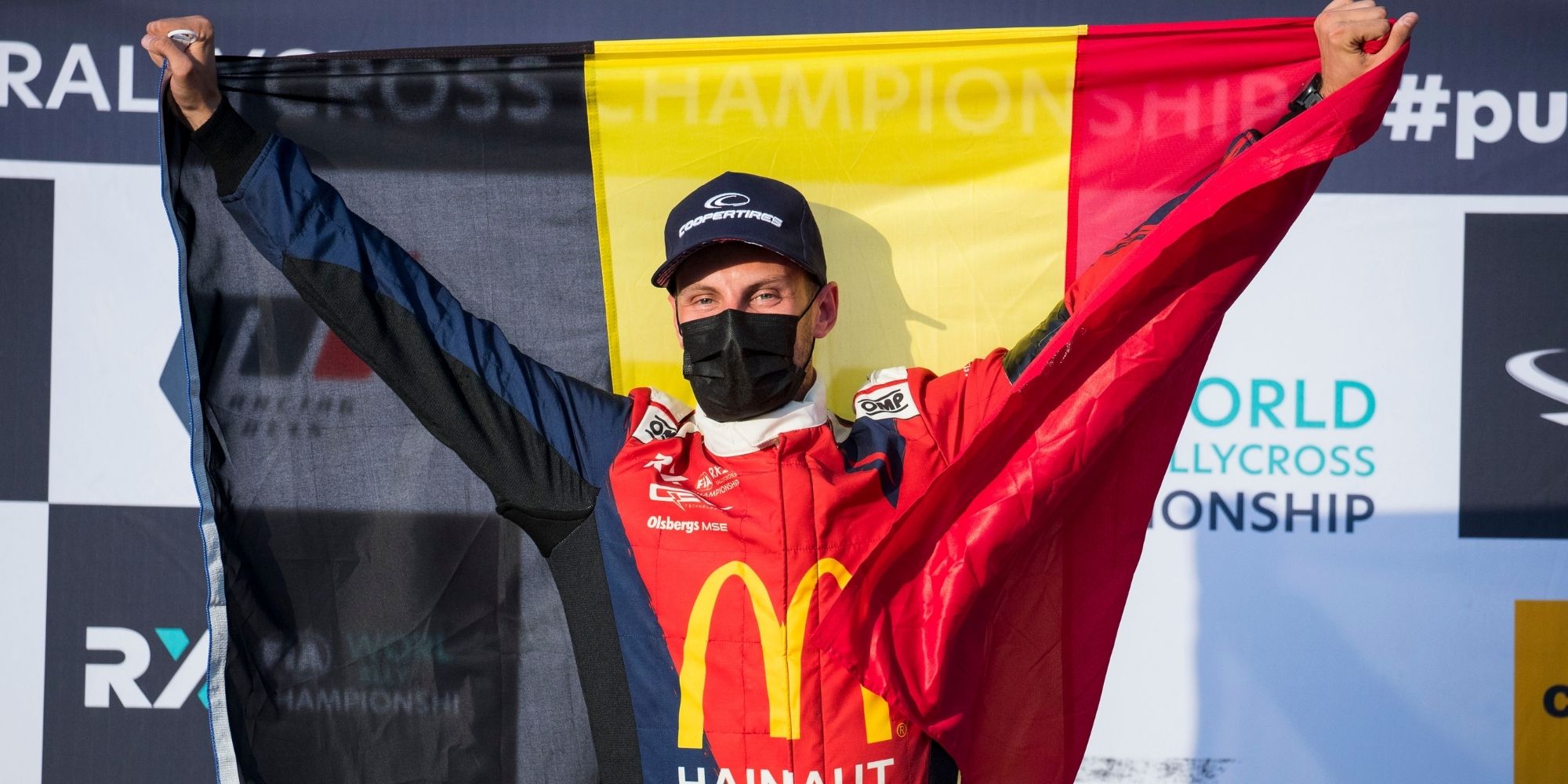 The Belgian was fastest in all four qualifying sessions and battled to victory in his semi-final before taking advantage of an incident involving his main rivals Fraser McConnell and Jesse Kallio in the showpiece race.

That left the way clear for Ole Henry Steinsholt to claim second, with the Norwegian bouncing back after two significant crashes earlier in the day, while fellow teenager Patrick O’Donovan completed the rostrum.

The 17-year-old had a redemption story of his own after a disappointing DNF in Q2 left him playing catch up on Saturday, and the youngster showed his potential with a mature performance on the debut race weekend for the first-ever FIA electric rallycross championship.

RX2e, a joint project between Spanish electro-mobility specialists QEV Technologies and Swedish rallycross powerhouse OMSE, has the honour of being the leading support series to the FIA World Rallycross Championship this season.

And the brand new category, based on an ‘arrive-and-drive’ concept with the intention of creating an accessible pathway to the top of the sport, certainly delivered plenty of action.

De Ridder was quickest out of the blocks on Friday, setting the pace in practice before going on to post the fastest times in both Q1 and Q2 with a couple of superb drives.

However, the 28-year-old was pushed all the way by McConnell and Kallio as the pair of former RX2 sparring partners picked up a second and third each to leave them level in the overnight standings.

As for O’Donovan, the youngest driver in the 10-car field started positively on his 4WD debut with sixth in Q1 but contact at the start of Q2 resulted in retirement and left him with a mountain to climb on Saturday.

The second day in Barcelona started with drama as heavy watering of the track caused treacherous practice conditions and resulted in a number of accidents – most notably a heavy shunt for Steinsholt while Suárez, Meunier and José Luis García also picked up damage.

The RX2e crew of engineers and mechanics went to work on the stricken machine, in full view of the live cameras belonging to the new RX+ broadcast platform, and pulled off a heroic repair job in time for Q3.

That gave Steinsholt a chance to line up in the quicker qualifying race, but the Norwegian soon found himself in trouble again – clipping the tyre barrier on the way into the final complex while chasing De Ridder.

The Norwegian bounced back into the centre of the track and collected Kallio, who in turn was hit by McConnell. The Jamaican was fastest to get going again, finishing a distant second while Kallio came home third and Steinsholt dragged his car around for fourth, with Meunier having come unstuck at the first corner after an ambitious move around the outside.

Suárez won the other race in Q3 comfortably while O’Donovan caught the eye, jumping from fifth to third in turn one before later pulling a tidy move on García to secure second and lift him up the intermediate standings.

De Ridder had his toughest challenge yet in Q4, going doorhandle-to-doorhandle with McConnell into turn one while Kallio and O’Donovan were hung out wide and opted to take early jokers. The Belgian was unruffled by the close attention though, and kept his cool to notch his fourth session win of the weekend.

In the other Q4 race, Steinsholt finally enjoyed a trouble-free run and showed his true pace to take the chequered flag while the unfortunate Meunier suffered mechanical issues, leaving the way open for Garcia to take second ahead of Oscar Ortfeldt – a late replacement for Spanish ace Pepe Arqué – and British veteran Mark Flaherty.

The first semi-final was a showdown between De Ridder and Kallio, with the Finn noticeably more aggressive in his driving style as he looked to hustle is rival into a mistake, but De Ridder did not put a wheel wrong and claimed yet another victory while Steinsholt finished third.

McConnell was untroubled out in front of the second semi-final, although the action was fast and furious behind as O’Donovan passed Meunier thanks to an alternative joker strategy before the RX150 star also found a way past Suárez when the Spaniard got out of shape exiting the hairpin.

Those results teed up a mouthwatering final involving De Ridder, McConnell, Kallio, Steinsholt, Suarez and O’Donovan, set to play out under the setting sun as the live crowd took advantage of cooler temperatures thanks to the unusual evening format.

However, the contest was effectively over before it began with McConnell losing out to De Ridder in turn one and suffering contact in the pack which turned the nose of his car into Kallio’s.

McConnell hit the barriers and was out on the spot while Kallio limped around for a lap before parking up, opening the way for Steinsholt and O’Donovan to profit.

Oblivious to the carnage behind, De Ridder cruised around to complete a historic clean sweep and lay down a marker for the rest of the season. Steinsholt was a comfortable second while O’Donovan displayed excellent race craft to resist the attentions of Suárez and claim an unexpected podium.

Guillaume De Ridder said: “I’m speechless – I can’t describe the weekend. There are so many great drivers in RX2e, so to take the first win and make history is just an amazing feeling.

“It has been a perfect weekend, winning every session and getting a clean sweep. This is a new series with a lot of fast guys so I didn’t exactly know what to expect, but we were obviously aiming to fight for the win. It couldn’t have gone better.

“The RX2e car has been even better than I could have expected. It is brand new technology, so you could expect some small failures, but it was absolutely flawless all weekend. The guys at QEV and OMSE have made a great product, it is a great piece of engineering and nice to drive so I have really enjoyed it.”

Ole Henry Steinsholt said: “It is amazing to stand on the podium at the end of such an up-and-down day. Yesterday our pace was okay but today I struggled a lot so I have to say a big thank you to the team and mechanics who made the car ready for both qualifying sessions today.

“It has been a lot of fun. I’m really happy. In the final, everything happened in front of me and suddenly I was second. I went to the inside to follow Guillaume, and then when I got to the gravel section I saw cars flying in front of me!”

Patrick O’Donovan said: “This is crazy. I had a really bad start to the weekend, and was really unlucky. I got held up in my first heat and never got to show my pace then I had a DNF at turn one in the second qualifying race, which really set us back.

“Today was a redemption day. I started every race but one on the outside and in last! Before the final I made a plan, with my spotters David Mansfield and Kevin Eriksson, that we were going to brake early and get the cut back in turn one. It worked as I got up into P4, then I saw Fraser and Jesse coming together… I kept my foot in through the dust and it was a sensational result. I had a lot of pressure from behind in the last two laps but it was really good fun.”

The FIA RX2e Championship continues with Round 2 at Höljes, Sweden next month (August 20-22). You can watch every single race live on RX+, the new FIA World Rallycross Championship broadcast platform.